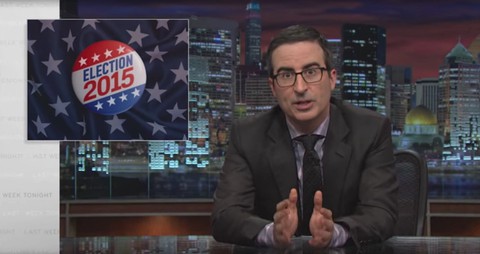 John Oliver’s Last Week Tonight returned on Sunday after a brief hiatus and took on the ridiculous coverage of the 2016 presidential race thus far and explained why election 2015 matters. Chiefly, election 2015 will have a deciding impact on the devastating Medicaid gap in America.

Races around the nation will have a direct impact on the intended expansion of Medicaid under Obamacare that would provide vital healthcare coverage to low-income working individuals. Oliver highlights how several Republican governors have refused to accept federal money to pay for this expansion of Medicaid because of their opposition to Obamacare itself. Oliver notes that Republican presidential hopeful John Kasich was one of the few Republican governors not to do so.

Watch Oliver skewer Obamacare-hating Republican governors for putting the lives of millions of Americans at risk, below:

Also of note with regards to last night’s show is the fact that Oliver’s team apparently reached out to Donald Trump to see if he would appear on this week’s episode. Trump said no and, per usual, decided to talk about it on Twitter:

A couple of points…
1. Yes, we have a boring show.
2. At no point did we invite Donald Trump to appear on it.https://t.co/qjpg9FLb0V