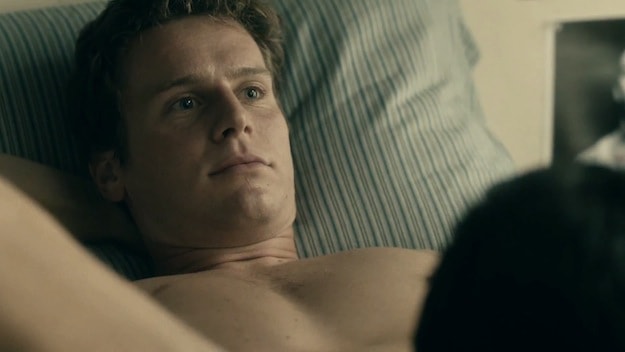 Looking star Jonathan Groff has promised fans of the cancelled HBO series that a finale set to air early next year will feature “a lot of sex.”

Speaking at an interview in San Francisco with Kevin Sessums during shooting of the series closer, Groff teased “I don’t want to say who it was with, but I just shot the most intense sex scene I’ve ever done.”

Added Groff in the discussion, reported by Broadway World:

“One of the cool things about ‘Looking’ is that after the first season, a lot of people – shockingly, liberal, open artists in New York and L.A. – said they didn’t know that gay people could have sex while facing each other. The show illuminated intimacy in sex [between men] without being porny or salacious. Those scenes felt very real and true to life. I was excited to do them. … I feel like a song from ‘Oklahoma!’: ‘I’m just a girl who can’t say no.’ (Laughs.) … Somehow, I’ve found myself in these projects where I’m literally exposed, and it’s felt comfortable and meaningful, so I’ve said yes. There’s something special about ‘Looking.’ Not a day has gone by that I haven’t wept. It’s been very emotional [but] great that we get to say goodbye to San Francisco and our characters.”

He added that the shoot has been “very emotional [but] a great that we get to say goodbye to San Francisco and our characters.”