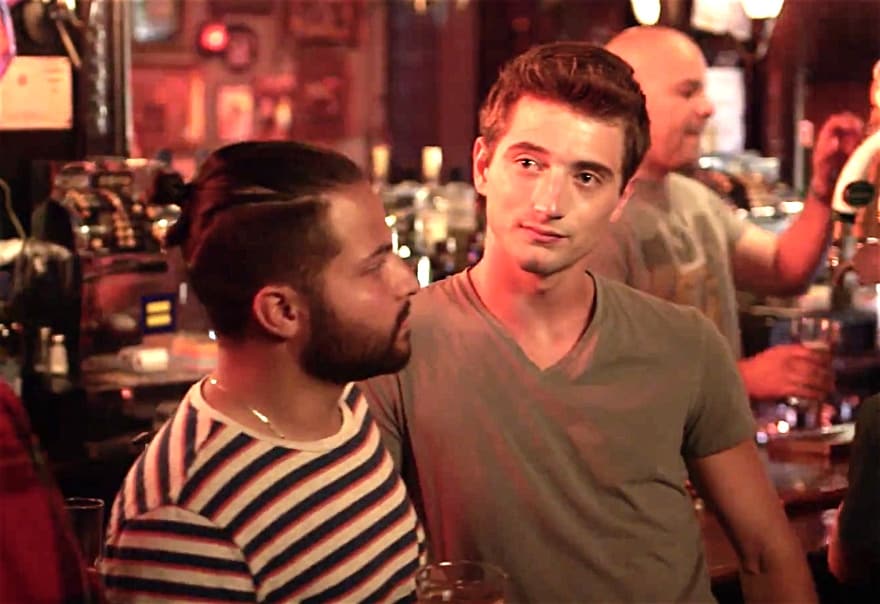 “When straight guys have a lot of sex, they’re called studs; but when gay guys do, they’re called sluts,” says gay adult performer JD Phoenix, in a new campaign from Public Health Solutions to educate people about PrEP (Pre-exposure prophylaxis).

“I like to party…and I like to be safe,” adds Phoenix in the spot, which shows him picking up a man at a club, cruising on Grindr, and taking the PrEP pill at home.

The spots, along with two others which focus on guys who date, and couples in serodiscordant relationships, were written and produced by Kenny Neal Shults and Savas Abadsidis for Public Health Solutions and their company, Connected Health Solutions.

Connected Health Solutions is a public health company and new media agency that produces social marketing PSAs for at-risk teens, the African-American, Latino, and Asian-American (in NYC’s Chinatown) communities, the LGBQT+ community, and other disadvantaged groups to help them live better lives. Their specialties include dealing with issues around poverty, HIV, trans-community issues, med-adherence, and bullying.

So far the spots are planned for social media distribution.

“J.D. is the embodiment of perceived young gay male sexual autonomy. He represents his generation’s unexpected, and for some vexing, response to the epidemic. And whether we like it not, there are plenty of young gay men using drugs and having barrier free sex, not at all unlike their heterosexual counterparts. But debasing gays for being human while in a higher risk group seemed at best like a double standard and at worst a highly unethical and ineffective means for keeping them healthy. J.D., a man who has and seemingly enjoys having plenty of sex, is perfect person to deliver the first line of the campaign: When straight guys have a lot of sex, they’re called studs; but when gay guys do, they’re called sluts. Without much effort at all, J.D. managed to subtly communicate the entire breadth of the contrasting principals and controversies surrounding PrEP and its detractors.”

Here are the other two spots. One features a dating couple named Lamar and Mario attempting to jumpstart the discussion about what PrEP is:

“When we sat down to consider the best audiences for the campaigns we knew only one thing for certain – we wanted to address gay men who might fall under the puritanical ‘Truvada Whore’ classification. That is, we wanted to reach men whose sexual and recreational drug behaviors both put them at a greater risk for both contracting HIV and being stigmatized for even considering going on PrEP. It seemed obvious to us that judging the men who could benefit most from PrEP for the behaviors that we think they should abandon and replace with consistent, unfaltering condom use was not our job. Our goal as HIV prevention professionals is to reduce HIV infections, and to communicate to those at high risk that they don’t deserve to be punished with HIV for ‘misbehaving.’ I mean, that’s the tacit implication of these reactionary pulpit platforms isn’t it; you either use a condom every time – behave – or you’re shamed and set apart from the rest of the community.”

A third spot, which is the most revealing about real-life relationships and PrEP, features serodiscordant couples Michael and Leo, and Octavia and Sean, and also adult film producer Michael Lucas:

What do you think of the new campaign?