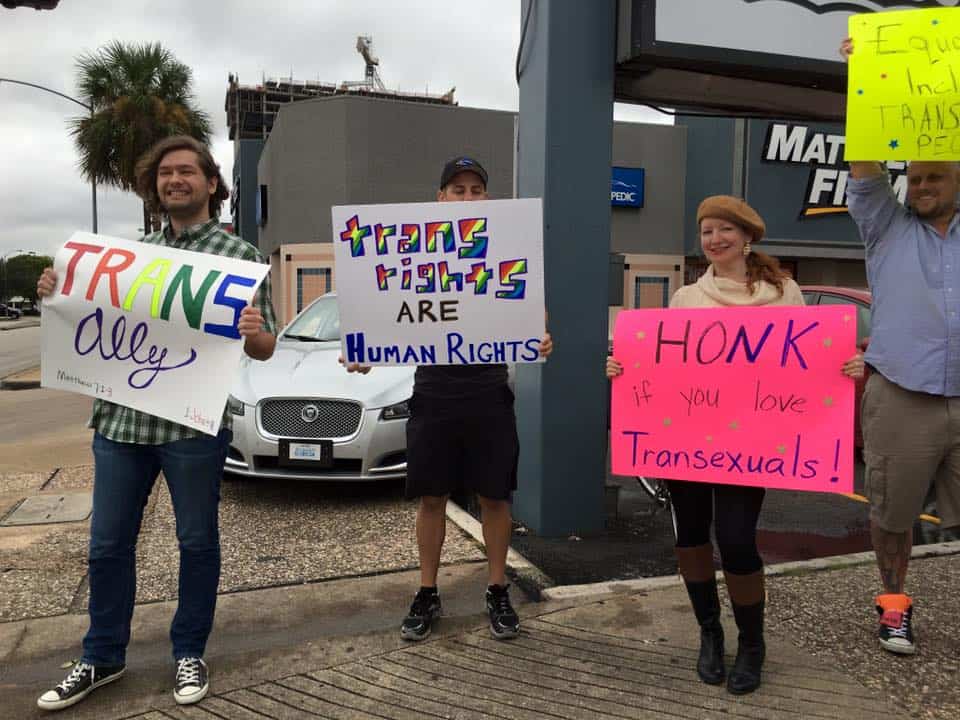 A group of transgender activists and allies staged a rally in Houston on Saturday in response to voters’ decision to repeal the city’s Equal Rights Ordinance.

Meanwhile, the leader of one of the groups opposing HERO is now advocating reparative therapy for trans people.

From The Houston Chronicle‘s report on Saturday’s rally:

In a city where few folks know transgender people, everyone knows about them on the heels of Proposition 1, an ordinance that would have granted protections to several groups of people, but that opponents feared would allow men to use women’s restrooms.

“We are here to say ‘We are not going to rape you in the bathroom,’ ” said Olivia Maynard, 41, a transgender woman with tidy makeup, flowing hair and a loose blouse. …

Nikki Araguz Loyd, founder of the Transgender National Alliance, which organized the rally, said coverage promoted a shallow, simplified notion of what a trans person is.

“Our mission is to create a new perception of trans people,” she said. “Not a stereotype.” 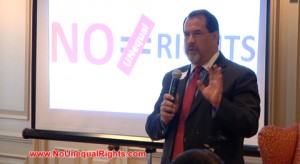 Dave Welch, executive director of the US Pastor Council, which led opposition to the ordinance, told the Chronicle in response to the rally that trans people are disrespecting the Christian God by wanting a body other than the one he created for them:

He said they suffered a “mental disorder” that should be “healed,” not affirmed by accommodative policies.

People do not have the right to choose their gender, he said, and should seek Biblical therapy to settle their confusion.

Welch’s group was behind a petition drive to repeal HERO, which was approved by the City Council in May 2014. The city rejected the petition, saying it didn’t have enough valid signatures. And both a judge and a jury upheld the city’s decision, saying the petition contained rampant forgery. However, the elected, all-Republican Texas Supreme Court later ruled that the city had to repeal the ordinance or place it on the ballot.

In a celebratory email last week, Welch called HERO’s defeat by voters “one of the greatest victories for God’s righteousness and justice in this nation in decades”:

The overwhelming defeat of Houston Proposition 1 in spite of a massive, nationally supported propaganda campaign by the Human Rights Campaign, ACLU, President Obama, Hillary Clinton, etc. was truly a shot heard around the world for God’s righteousness and justice.

The angry, defamatory and vicious responses by Mayor Parker only prove to illustrate how personal this was to her, having nothing to do with what is right or what is best for the people of the City of Houston. The breathtaking 22 point margin (61-39) “stunned” the national LGBT activists – and yet we must remember that they are passionately committed to destroying all vestiges of the Judeo-Christian foundations of our nation. The increased turnout of 27%, (268,459 votes cast, 979,401 registered) while still with MUCH room to improve, buried projections and recent turnout numbers, most of it attributed to the churches and No on Proposition 1 vote. …

The innumerable stories in national media illustrate the profound impact that our tenacity and effort, favored by God’s grace, has had on the nation and only in the days, months and years ahead will we know its full scope on turning the people and country back to God.