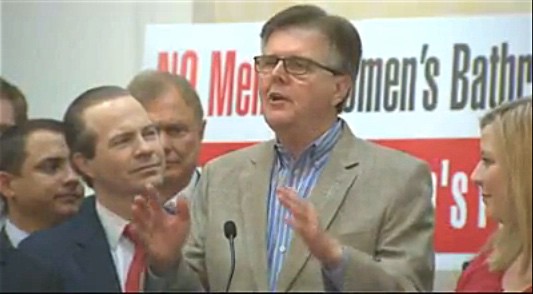 The bill’s defeat of course, was fueled by a right-wing campaign branding it “the bathroom ordinance” which scared voters by claiming it would allow sexual predators into women’s restrooms, and endangered the lives of children.

Patrick then attacked Mayor Annise Parker, who slammed the bill’s defeat and called the fearmongering religious right out on their “blatant lies.”

“I’m disappointed that the mayor could not be gracious tonight. I’m disappointed that in her waning hours of being in office she still divisive. But mayor, you are wrong. And the people of Texas spoke up in Houston and made it very clear that this is not the kind of city that they want to live in. And I hope those in public office in other party as we move forward understand that when it comes to common sense and common decency and what is right in our church and our families that we will not accept anyone telling us that wrong is right.”

Patrick then hugged his pastor and said, “When the church stands up, the black church, the brown church, or the white church, every denomination, and stands up and says this is who we are as a Judeo Christian nation, then we win.”