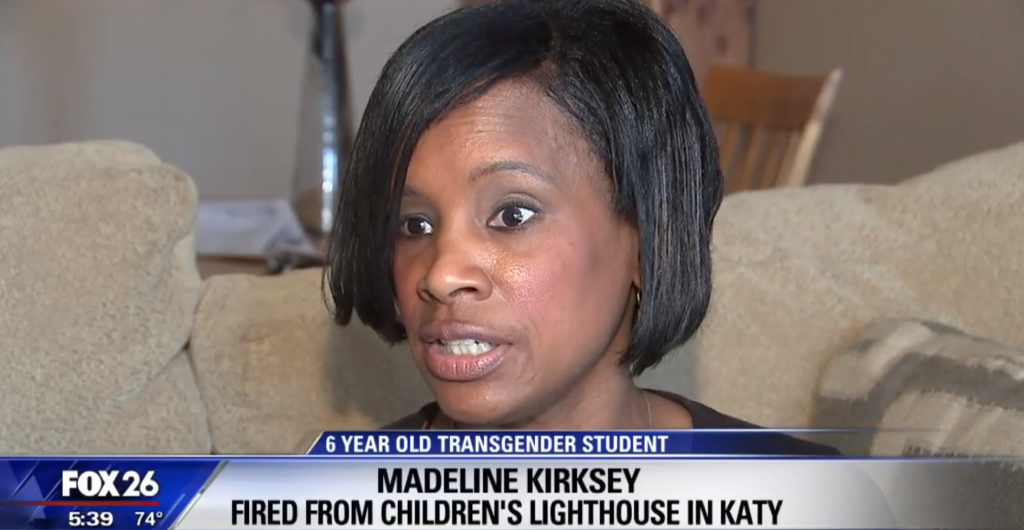 The Houston Equal Rights Ordinance may have been defeated, but one area school is treating transgender children with dignity and respect.

The Children’s Lighthouse Learning Center in Katy, a Houston suburb, reportedly fired two staff members for refusing to accept a transgender boy as a boy and call him by a boy’s name.

Fox 26, which did a horrible job of reporting on HERO, is still referring to the boy as a girl:

“It caused confusion,” says one employee. At Children’s Lighthouse Learning Center on Clay Road in Katy, Madeline Kirksey says last week she and her staff were told a six-year-old student is transgender. According to Kirksey, the child’s parents cut the girl’s hair short and Children’s Lighthouse Learning Center workers were instructed to start calling the girl a boy and by a boy’s name.

Kirksey was a manager at the school and says she suggested informing all parents. Instead, school administrators allegedly gave staff a handout to refer to if students have questions.

“I don’t think we should be talking to other people’s children who are under the age of 18 about being transgender,” says Kirksey.

The school reportedly handed out a set of guidelines on dealing with transgender students, which said things like “Accord them the same respect you wish for yourself,” “Help defend their dignity,” “Educate yourself and your students” and, “Like the first black student in a white school 30 years ago, the transgender student today faces a population that finds them strange and frightening.”

According to its website, Children’s Lighthouse operates educational childcare centers in eight states, and serves children ages 6 weeks to 12 years.