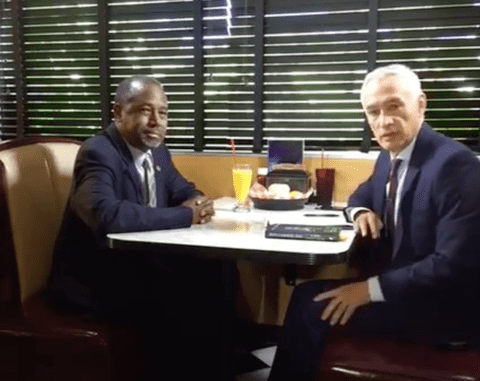 On Thursday, Republican presidential frontrunner Ben Carson responded to the repeal of Houston’s Equal Rights Ordinance, suggesting that transgender people should have their own bathrooms because otherwise “everybody else” would be “uncomfortable”, which Carson characterized as “not fair.”

Speaking with Jorge Ramos in a live interview on Facebook for Fusion, Carson said,

“How about we have a transgender bathroom?” […]

“It is not fair for them to make everybody else uncomfortable,” Carson said of transgender people. “It’s one of the things that I don’t particularly like about the [LGBT] movement. I think everybody has equal rights, but I’m not sure that anybody should have extra rights—extra rights when it comes to redefining everything for everybody else and imposing your view on everybody else.”

“The way this country was designed was live and let live,” Carson said, as he sipped a tall glass of orange juice in Miami’s Moonlite Diner. “I feel, gay people, they can do anything they want.”

“But you’re against gay marriage,” Ramos pointed out.

“I believe marriage is between a man and a woman,” Carson said. “But I don’t care what somebody else thinks. They can do whatever they want. What I object to is they try to change the definitions for everybody.”

Watch the interview, which turns to LGBT rights at the 9 minute mark, below: