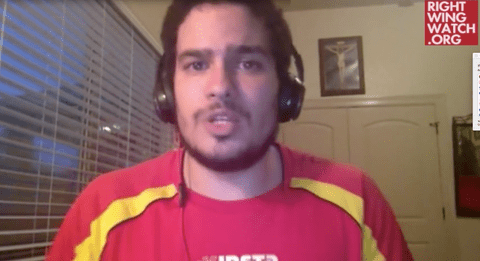 In his latest video, crazy right-wing vlogger Theodore Shoebat says the Catholic Church should put gay priests to death because they are “suicide bombers” intentionally trying to destroy the church.

Shoebat says that gay priests are only in the Church to “prey after young men [and] boys.”

“Once they become a pastor or a priest, they begin their destruction,” he said. “And they only do this for one reason, and that is to make the church look bad, to make the church evil … It’s obvious that Satan knows homosexuality is evil and it’s also obvious to me that these very sodomites who enter the church, they as well know that homosexuality is evil because they do this so that other people can say, ‘See, this is Christianity.'”

“Civilization has no room for homosexuality,” Shoebat stated, noting that the Catholic Church once had a policy that gay priests “would be delivered to the secular authorities and put to death” as he lamented that “it’s just too damn bad that we don’t have these laws being enacted any more.”

Previous Post: « Russia’s Edition of ‘Maxim’ Magazine Publishes List of ‘Gays We Respect’
Next Post: Brandon Skeie May Be the Cutest Singer Yet to Cover Adele’s ‘Hello’ – VIDEO »