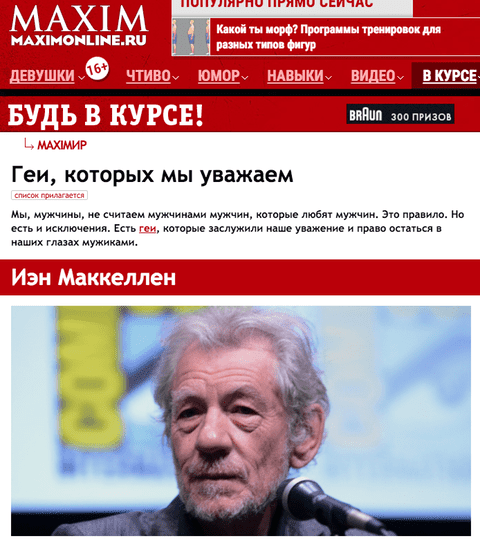 The Russian edition of men’s magazine Maxim has published an article in which it lists “gays we respect,” noting that these men are “exceptions” to the rule that gay men are not really men.

“We, men, do not consider men who love men to be men. This is the rule. But there are exceptions. There are gays who have earned our respect and the right to remain real men in our eyes.”

The article says that Maxim Russia “forgives” Ian McKellen for being gay because of his acting roles and because Queen Elizabeth II knighted him.

Russian Maxim was apparently on the fence about adding Neil Patrick Harris to the list:

“We weren’t sure about including Neil Patrick Harris in the list — after all, he declared himself a ‘happy gay’ in 2006. But his performance as Barney Stinson in the seriesHow I Met Your Mother hasn’t left us indifferent. It’s impossible not to respect someone who elevated the hunt for girls into a true art, who systematized all the tricks and techniques and created the ‘Bro Code.’ Even if he was just acting the role. But how he acted!”

BuzzFeed news reports that when asked to comment about the post, an editor for the Russian edition of Maxim said, “our position is clearly formulated in the introduction to the article.”

Meanwhile, U.S. Maxim was not pleased with the post:

“We are deeply disturbed by the article in Maxim Russia and fully condemn it,” a spokesperson for Maxim told BuzzFeed News by e-mail. “It is entirely against the views of U.S. Maxim.”