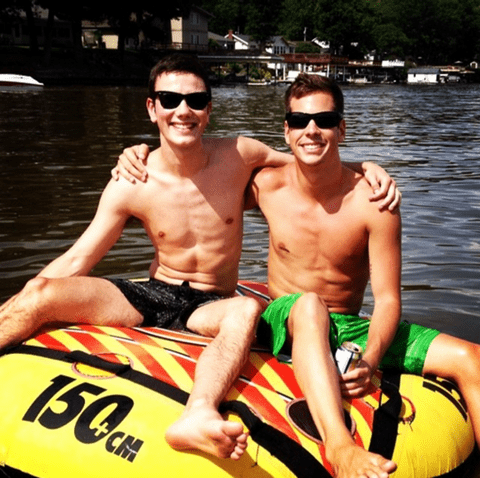 University of Miami diver Tanner Wilfong (above right) and Jamie Bissett (above left), a diver who recently graduated from Purdue University, have publicly come out as gay and in a relationship.

Bissett is the reigning Canadian national 3-meter champion in diving. Wilfong is the first active athlete in the history of University of Miami to come out as gay, as The Roanoke Times reports in its profile on him.

“Wilfong, by agreeing to talk to The Roanoke Times for this story, is believed to be the only active male athlete in the Atlantic Coast Conference to talk publicly about being gay. He is one of seven gay male athletes to announce his sexuality publicly who is currently competing in a Power-5 conference (ACC, Big Ten, Big 12, Pac-12, SEC).”

Wilfong had just come out to his friends, teammates and coach when he met Bissett while competing at the U.S. championships. They began dating a few weeks later:

“I think every day is a better day,” Wilfong says. “Our relationship has changed so much since we first met, because [Jamie] wasn’t even ‘out.’ It’s a complete progression until the day you depart, move on or die.”

Their relationship is approaching the two-year anniversary in December.

Bissett told friends and family he’s gay a few months after he started dating Wilfong. Bissett is also now the two-time reigning Canadian national champion on 3-meter springboard. He’s completed his NCAA eligibility and is training to represent Canada at the 2016 Olympics.

“He was ‘out’ when we met, and obviously, that was scary for me,” Bissett says. “I’m thankful to have met him. I’ve learned a lot about myself through having met him and definitely credit that whole experience to where I am now.”

“I thought people would only like me if I was a good diver…You start getting that stress mixed with your sexuality, and you worry what people think about you all the time….I tried to literally change who I was.”

Now, Wilfong says he is happy to be known as a gay diver.

“I’m OK with gay being part of my reputation. I like it,” Wilfong says. “In high school, it would have been the uncool thing for me in my mind. Now, it’s the cool thing. It’s just because the cool thing is me being myself and me not caring for a single second what anyone else thinks about me.”

Both Wilfong and Bissett have qualified for the 2016 U.S. Olympic Trials. However, Wilfong says focusing on qualifying for the 2020 games is more realistic given a back injury that had him red-shirted his junior year.

Congratulations to both Wilfong and Bissett! You can read The Roanoke Times’ entire profile on Wilfong here.

Check out a few more photos of Wilfong and Bissett, below: