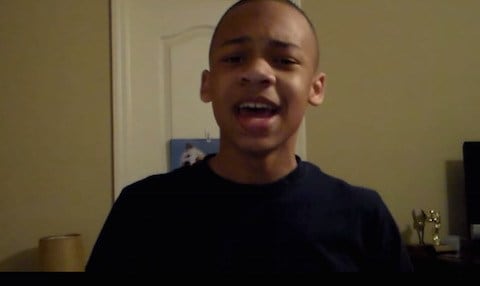 Last month, Pearson shocked his YouTube followers with an announcement that he was abandoning conservatism because of the GOP’s ineptitude on issues of social justice. Pearson had previously labeled the Black Lives Matter movement as “domestic terrorists.”

The former conservative wonder kid became an internet phenom because of videos in which he denounced President Obama and others on the political left. The 13-year-old was on record as having endorsed Ted Cruz for President before he backed Sanders’ political horse.

Speaking with CNN about his endorsement of Sanders, Pearson said,

“This election will make a pivotal difference in the future of our nation. If it takes changing your mind to make the right choice as to who should lead our country, I am willing to do it. Screw the optics,” Pearson, the former chairman of Teens for Ted Cruz, told CNN.

“People are struggling in America. We need the right man in the White House. And in my opinion, that man is Senator Bernie Sanders.”

“Systemic racism is real. Police brutality is real. Youth unemployment is real. Income inequality is real. Poverty in the richest country in the world is real,” Pearson said. “There is only one candidate that has shown enough courage to accept these issues as a painful reality and has released plans to tackle every single one of them. That candidate, that courageous trailblazer, is Bernie Sanders. That’s how I made my decision.”

As for what his one-time Republican supporters thought of his political 180, Pearson says,

“They weren’t happy, but honestly, I didn’t expect them to be. I have to be my own person. I have to stand on my own two feet. My activism is centered around fighting to give young people a voice in their government and in the political arena,” said Pearson, executive director of Young Georgians of Government. “With President Sanders, young people will have that voice. So, in my opinion, I’m doing exactly what I set out to do at the beginning of my political career.”