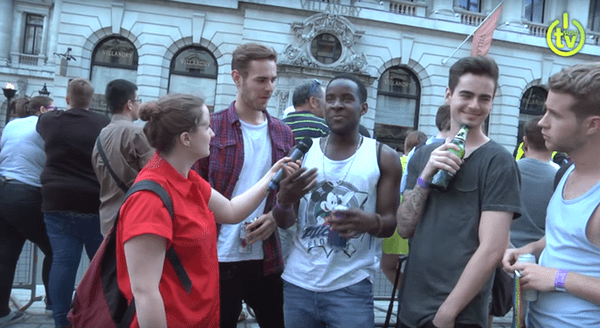 A new documentary from young filmmaker Amy Ashenden examines the resurgence of young people saying “that’s so gay” to see whether that phrase is homophobic or whether, in her words, “language has evolved.”

Writing in The Guardian, Ashenden discusses her observation that “gay” is often used to mean “bad”:

“When I was growing up, I noticed something about the word ‘gay’. The more prevalent it became, the more negative its connotations. A word that originally meant happy and carefree became a neutral label to describe homosexuality, and ended up being a term used to pinpoint something people don’t like, find embarrassing, or want to distance themselves from.”

Ashenden suggests that “gay” is being used as a negative descriptor more and more by today’s youth. Which made her wonder, “[D]oes this mean that young people are more homophobic than ever before?”

With that question as her starting point, Ashenden set out to see if using the word “gay” in a negative way is ever not homophobic. In her documentary The Gay Word, she interviews people both gay and straight, older and younger, to find out what “gay” means to them. She also talks to a sociologist who argues that saying “that’s so gay” isn’t homophobic, along with an activist from an LGBT organization who takes the opposite view and wants us all to “get the meaning straight.”

Of her project, Ashden says, “In making this film, I’ve learned just how much of a loaded term gay is.” Ultimately, she believes that we can’t overlook the damage that’s done when we conflate a word that describes someone’s identity with something negative: “Saying ‘eurgh, that’s gay’ reveals a lack of collective understanding of what it means to identify as gay.”

Previous Post: « NASA Had an Incredible Year and These are the Highlights: WATCH
Next Post: Steve Grand Takes You Behind-the-Scenes of His Christmas Video Shoot: WATCH »