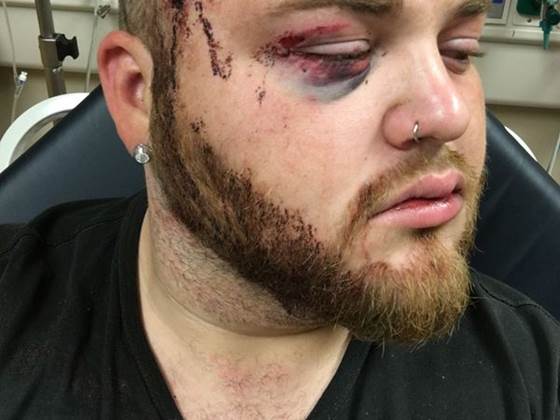 A gay Virginia man was reportedly assaulted in his home on Christmas, being called a “faggot” while being beaten and stabbed.

Drew Inge, a hair stylist living in Yorktown, Virginia, suffered a laceration to his eye, was kicked in the head multiple times, had four teeth knocked out and had one hand and multiple fingers broken by an individual identified only as “someone he barely knew.”

Inge posted the above picture on Instagram recounting some of the horrific details of his assault before removing them, citing “legal reasons.

“I was thrown into my bathtub, and stomped in the face and jaw over and over while being called a ’faggot’…He tackled me from behind into my door and slammed my fingers on my right hand into the door, breaking them and ripping them open…I’m telling this story as a reminder of the strength I have, the passion for life, and the miracle that I am alive. I will be out of work for a while, and I don’t know the extent of damage done to my fingers but I will be back to do hair, and I won’t let anything stop me.”

Inge also shared that he was stabbed in the eye with a broken shower rod by his assailant. Inge was eventually able to call 911 and summon help. His attacker has reportedly been arrested.

Updating the post without many of the above details, Inge writes,

“I had to delete the story due to legal reasons, I’m being advised that it may not be good to even post photos. I’m mad because I don’t see anything wrong with being open and honest about what happened. It’s makes no sense to me why, but needless to say I was attacked, beaten, held against my will, stabbed in the face with a metal object and am now recovering. I won’t be able to work as one of the injuries I sustained was my fingers I use to cut hair being crushed. Im having dental work to have teeth that were stomped out of my face fixed. Sorry I can’t put details on here. But I’m keeping this here as a reminder of the strength I have, the passion for life, and the miracle that I am alive. When you keep things private and don’t say anything, you give those things power over you, and I don’t like that. I will be out of work for a while, and I don’t know the extent of damage done to my fingers but I will be back to do hair in a few weeks hopefully, and I won’t let anything stop me. I’m so overwhelmed with the love I have felt, and I honestly can’t believe the way I am perceived by my friends and family. I’m including the link to a donation page to help with my medical bills and other expenses in my bio!! Thank you all for the support and love, you’re amazing. ❤❤️❤️”

A family member identified only as Robert Inge, has set up a YouCaring crowdfunding page to help pay for Drew’s medical bills and to offset his loss of wages while he recovers:

As you probably know, Drew is self-employed and all of his income is based on his ability to use his hands to style hair. You may know his Instagram, @hairbydrewinge. Right now he isn’t sure when he will be able to return to work, or how much he will be able to earn with limited use of his hands. We created this fundraiser to help him pay for his emergency room and medical bills, and to go towards his rent and living expenses. Please consider donating any amount, every little bit helps.