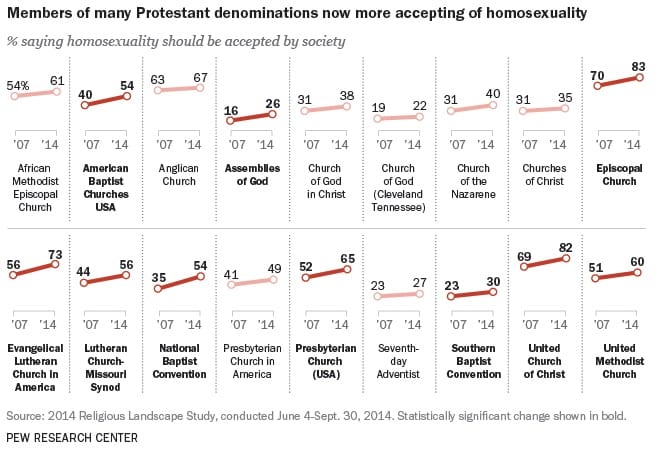 Acceptance of homosexuality is growing among Christians across America, according to new poll data from Pew Research:

Amid a changing religious landscape that has seen a declining percentage of Americans who identify as Christian, a majority of U.S. Christians (54%) now say that homosexuality should be accepted, rather than discouraged, by society. While this is still considerably lower than the shares of religiously unaffiliated people (83%) and members of non-Christian faiths (76%) who say the same, the Christian figure has increased by 10 percentage points since we conducted a similar study in 2007. It reflects a growing acceptance of homosexuality among all Americans – from 50% to 62% – during the same period.

Among Christians, this trend is driven partly by younger church members, who are generally more accepting of homosexuality than their elder counterparts. For example, roughly half (51%) of evangelical Protestants in the Millennial generation (born between 1981 and 1996) say homosexuality should be accepted by society, compared with a third of evangelical Baby Boomers and a fifth of evangelicals in the Silent generation. Generational differences with similar patterns also are evident among Catholics, mainline Protestants and members of the historically black Protestant tradition.

Regardless of age, seven-in-ten Catholics – whose church teaches that homosexual behavior is “intrinsically disordered” – say that homosexuality should be accepted by society, a 12-percentage-point increase since 2007. Similar jumps have occurred among mainline Protestants (from 56% to 66%), Orthodox Christians (from 48% to 62%) and members of the historically black Protestant tradition (from 39% to 51%).