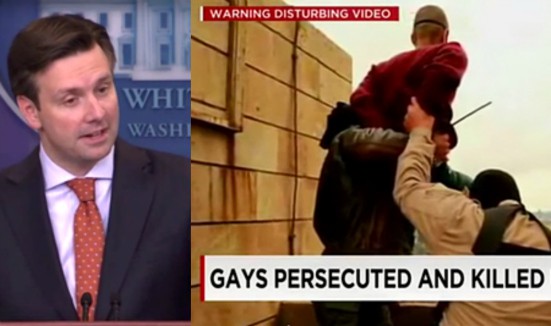 White House Press Secretary Josh Earnest says that the White House will prioritize the resettlement of the “most vulnerable” Syrian refugees coming to America, a category that includes LGBT refugees.

Earnest would not specify a specific number of LGBT refugees the United States would accept, saying it was against policy to set such quotas.

“When it comes to our refugee resettlement efforts, the United States does not set aside quotas like what you just described,” Earnest said. “But what the United States does do, in terms of resettling refugees, is prioritize the cases of those who are deemed to be the most vulnerable — those who have been subjected to acts of torture, those who have been singled out because of their minority status in one way or another.”

“There are no quotas that are set aside, but the process that we have implemented does prioritize the cases of those who have been subjected to torture, including like the torture that you described, or might have been singled out for their status as a minority, whether that’s a racial minority or an ethnic minority or a religious minority, or even somebody — an LGBT person,” Earnest said.

“The U.S. does not establish quotas o‎r set-asides for refugee applicants based on type of claim (race, religion, membership in a particular social group, etc),” the spokesperson said. “Each refugee applicant is considered for U.S. resettlement based upon the merits of his or her individual claim, which could include persecution based on being LGBT.”

The Blade reports that more than 30 men in Iraq and Syria have been executed over allegations of “sodomy.”

Previous Post: « Guys from ‘Fiddler on the Roof’ Sing Gender-Bending Cover of ‘Matchmaker, Matchmaker’ – WATCH
Next Post: Christian University in Tennessee Wins Waiver to Ban Gay Students: ‘This Is Who We Are’ – WATCH »