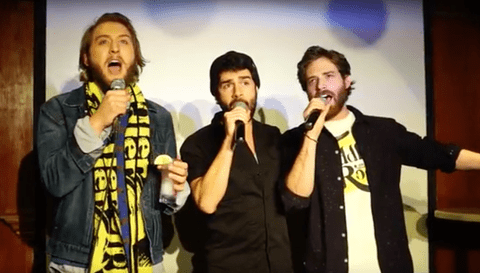 On Sunday, three male cast members from Broadway’s current production of Fiddler on the Roof regaled a crowd full of gay Jewish men celebrating Hannukah with a gender-bending performance of the iconic song, “Matchmaker, Matchmaker.”

The three actors play the male suitors to the female characters who go to the matchmaker seeking husbands. Video of the performance has been posted online and is a fun romp for lovers of the classic musical.

The performance happened at a Hanukkah party put on by group Hebro which describes itself as “a social-startup for gay Jews living in New York City.”

The idea for the performance came from Fiddler‘s own Adam Kantor, who plays Motel the Tailor.

“The show deals with the question of how do you accept modernity while maintaining tradition and maintaining values that have been passed onto you from generations,“ he said. “Each daughter does something progressively more radical when it comes to marriage… Tevye is left with this question, how can I accept? How can I bend so far without breaking? And I think that’s something a lot of people can relate to today, especially when it comes to marriage equality.”

In Shalom Aleichem’s stories, on which the musical is based, Tevye had seven daughters. The musical mentions five, of which only the first three have their romances dramatized. But given the political progression of marriage today, it’s clear to Kantor how the next daughter would challenge her father. “If Tevye had a fourth daughter, she would be a lesbian.”

Watch the performance, below:

“Playing with matches
A girl can get burned
So,
Bring me no ring
Groom me no groom
Find me no find
Catch me no catch
Unless he’s a matchless match.”

Such a beautiful thing they have going on.

Fiddler on the Roof is currently in previews and opens on December 20.