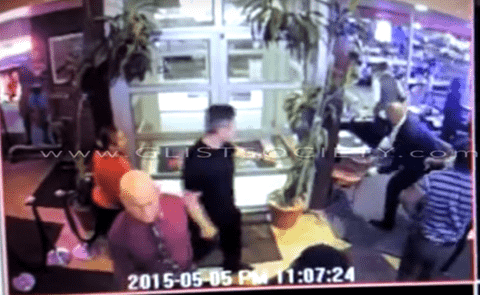 New video of a brawl at restaurant Dallas BBQ in New York City’s Chelsea neighborhood is raising questions about previous reports on the incident and may corroborate some of what the alleged attacker has said about the fight.

The brawl happened in May 2015 and ended with the suspected attacker, Bayna-Lehkiem El-Amin (below), smashing a chair on the head of another man, Jonathan Snipes. The NYPD were investigating the attack as a hate crime. Snipes said that El-Amin shouted gay slurs at him and his boyfriend as he attacked him. 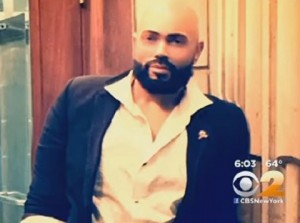 Recently, El-Amin, who was charged with assault and attempted assault, countersued Snipes and his boyfriend, claiming that he was the victim of the attack. In the lawsuit, El-Amin alleges that Snipes incited the fight. El-Amin claims he tried to intervene in a verbal altercation between Snipes and his boyfriend that was disturbing others at the restaurant. According to El-Aming, this led Snipes to “viciously” strike him on the head with a “heavy, blunt weapon.”

The new footage of the brawl appears to show Snipes making the first move. From there the fight escalates to its ultimately conclusion of El-Amin smashing the chair on Snipes’ head. El-Amin says he did so because he was “left with no choice.”

El-Amin says that his only crime “was to be a man of color wrongly accused by his attacker, a privileged white man.”

Watch the new video, which shows the fight from a new angle starting at about the 3:00 mark, below: