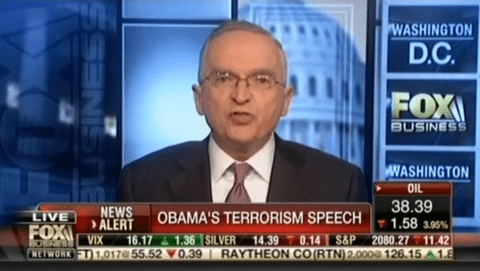 President Obama made the impromptu address to the nation in response to growing concerns about terrorism in the wake of the San Bernardino shootings.

“So far, we have no evidence that the killers were directed by a terrorist organization overseas, or that they were part of a broader conspiracy here at home. But it is clear that the two of them had gone down the dark path of radicalization, embracing a perverted interpretation of Islam that calls for war against America and the West.”

“The threat from terrorism is real, but we will overcome it. We will destroy ISIL and any other organization that tries to harm us. Our success won’t depend on tough talk, or abandoning our values, or giving into fear. That’s what groups like ISIL are hoping for. Instead, we will prevail by being strong and smart, resilient and relentless, and by drawing upon every aspect of American power.”

Peters was apparently unimpressed with the President’s comments, as Mashable notes:

“Mr. President, we’re not afraid — we’re angry, we’re pissed off, we’re furious!” retired Lt. Col. Ralph Peters said Monday on the Fox Business Network show Varney and Co. “We want you to react, we want you to do something. You’re afraid. I mean, this guy is such a total pussy, it’s stunning.”

Peters did get a bit of a reprimand from the show’s host, Stuart Varney, for calling the President a “pussy”:

“OK Ralph, I can tell you are super angry, and I asked you what your reaction was, but I’ve got to call you, you cannot use language like that on the program,” Varney said.

Watch the video below, in which Peters also calls protestors in Ferguson, Missouri “thugs.”

UPDATE: Fox News has suspended Peters for his remarks along with commentator (née Clueless actress) Stacey Dash for saying President Obama “doesn’t give a sh*t” about terrorism.

“Earlier today, Fox contributors Lt. Col. Ralph Peters and Stacey Dash made comments on different programs that were completely inappropriate and unacceptable for our air,” Bill Shine, senior executive vice president of programming for Fox News and Fox Business, said in a statement to The Hollywood Reporter. “Fox Business Network and Fox News Channel do not condone the use of such language, and have suspended both Peters and Dash for two weeks.”