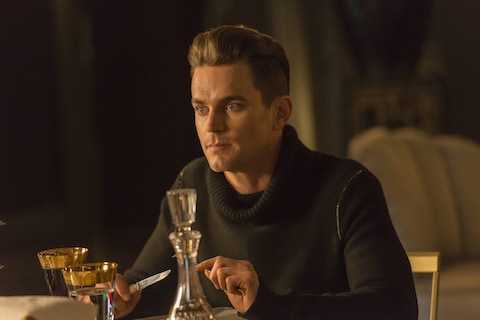 The identity of the titular “She” in tonight’s episode “She Gets Revenge” felt like a mystery right up until the episode’s final shocking moments.

If that wasn’t a gift enough, the show also attempted to address some of its sloppier plot points, and it gave some favorite characters plenty of opportunity to shine.

Beware of SPOILERS below, but once you’ve seen the episode, read on for our recap. 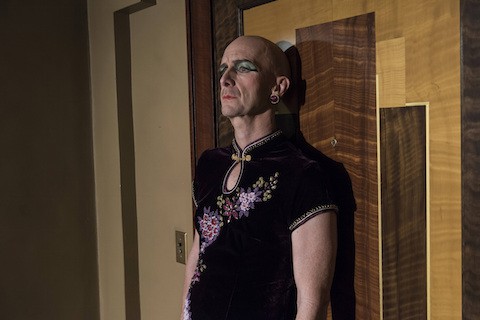 Inspired by an elderly couple who committed suicide together at the hotel, Liz Taylor (Denis O’Hare) has decided to shuffle herself off this mortal coil. She picks up the revolver, but before she can bid adieu, Iris (Kathy Bates) reminds her that if she has any remaining unfinished business, she’ll be trapped at the Cortez forever. Turns out she’s got one particularly big unresolved issue: The son she abandoned to become Liz. 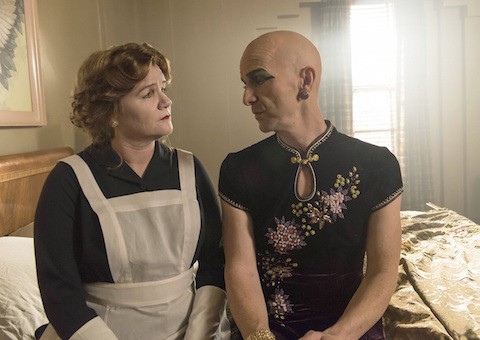 She enlists Miss Evers (Mare Winningham) in getting her son to the hotel. The adult son, Douglas, arrives and engages Liz in typical bartender back-and-forth. Douglas discusses his wife and his desire to leave his unfulfilling job to strike out on his own. Liz, not yet revealing herself to be Douglas’ father, advises him to chase his passions, but the two say goodbye before they truly reconnect.

Iris decides she’s going to kill herself as well, but before they can make good on their suicide pact, Evers tells Liz that Douglas is back up in the bar. Liz goes to meet him, and the two share what’s probably the sweetest moment in AHS history. Just as Liz is about to tell Douglas the truth, he tells Liz that he already knows. He recognized her, and he’s OK with it. He tells Liz there’s room in his life for another woman, and the words hit her in the heart so hard, she’s actually stumbles backward a bit.

Liz shows Miss Evers her gratitude with a new washer/dryer and then joins Iris as they plan to off themselves together. Iris assembled an arsenal of potential tools to do the deed, and she just finished the final touches on the tribute film she made herself for her three Instagram followers (scored by that Lee Ann Womack song). Liz, however, has a new lease on life. Douglas wants her in his life. Plus, two broads like Liz and Iris deserve something better, a second act. They’re the ones who should inherit the Earth. 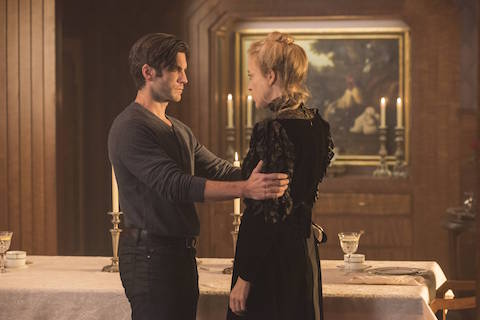 Before we see how that comes to pass, there are a few other reunions we need to cover. First off the Lowes, John (Wes Bentley) and Alex (Chloe Sevigny). He’s been busy wrapping up the ninth of the Ten Commandments Killings — an attack on what appeared to be some kind of pagan church — and she’s been busy figuring out how she’s going to solve her pesky murderous horde of vampire children problem. He helps her round up the brats and toss them in the tomb with Ramona (Angela Bassett), essentially providing Ms. Royale to raise an army or eat ’em up like a selection of tapas. We shall see.

That little problem taken care of, Alex and John celebrate by hopping into bed together. Alex sees something different about John now, and the two scoop up their vampire son and head back home to the other child everyone seemed to forget about. (The two characters actually share a pretty meta exchange about neglecting their daughter, which we’ve all been thinking about for a few weeks now.) This renewed commitment to the domestic life surely won’t sit well with James Patrick March (Evan Peters), and it certainly enrages Sally (Sarah Paulson) who is screaming, crying and vowing to kill them as they exit the Cortez. For a season just loaded with flashbacks and backstories, we’ve seen little of Sally pre-Cortez. I feel like all her suffering will pack a much more emotional punch once we dive into what makes her tick. 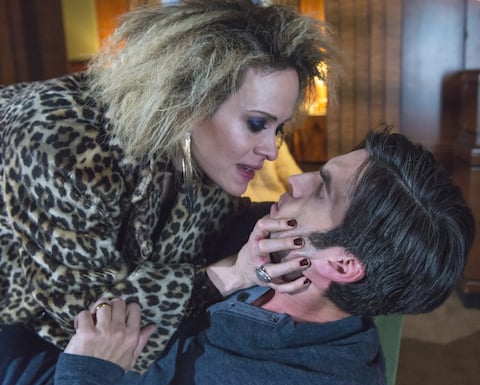 If only all reunions were so sweet. Natacha (Alexandra Daddario) arrives for her little slumber party with Gaga. She may be new to this time, but Nat wasn’t born yesterday. She knows the Countess is after her man. Natacha pulls a knife, but Gaga pulls a gun and bang! Nat’s dead.

Meanwhile, across town, Donovan (Matt Bomer) is dropping in on Rudolph Valentino (Finn Wittrock) at his motel. Rudy pulls a sword, but Donovan pulls a gun and bang! Rudy’s dead. For good measure, Donovan pumps Valentino’s pretty face full of bulletholes and reminds him that Donovan’s cheekbones are better. (“Cheekbones for days.”) 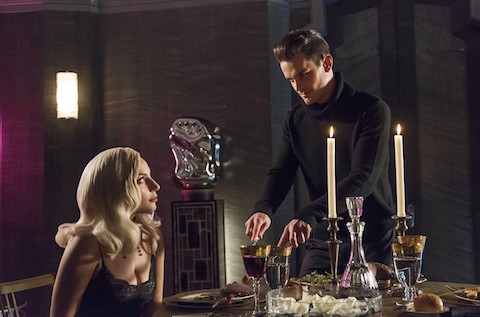 Back at the Cortez, Gaga finishes telling Donovan about the ghost of Will Drake (Cheyenne Jackson) ruining her get rich quick scheme when Donovan drops the news of Valentino’s murder on her. She flees to the scene to make sure he’s telling the truth (which, we know he is, so why must we have this scene of Gaga crying over his corpse, other than to bolster her Golden Globe bid?). She returns to find Donovan hilariously dancing to “Hotline Bling.” Even though he knew she would kill him, he didn’t run. Death is the only way she’ll let him love her, or some such nonsense.

While the two of them bathe in the melodrama, in pops Iris and Liz, guns ablazing.

So, did Iris and Liz kill the Countess? I’d say doubtful. There are only a few episodes left in the new year, and, although I’d love one less character to worry about, it doesn’t seem like we’d be able to do much with Ramona and Will without her.

What do you think? Does the Countess live on?