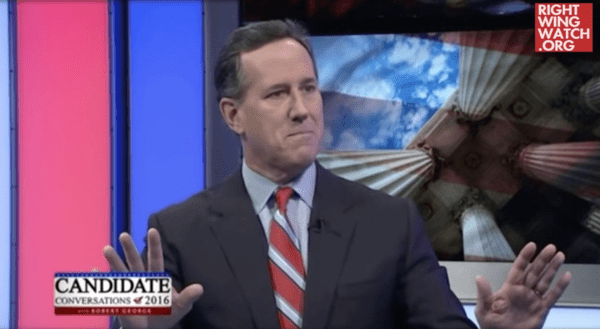 Presidential long-shot Rick Santorum said in an interview Sunday that he would enforce the Defense of Marriage Act (DOMA) despite the Supreme Court’s 2013 decision that effectively gutted it.

“I would confront the court on everything from, for example, on the issue of same-sex marriage, we have a federal law that’s in place right now, which is the Defense of Marriage Act, which was found unconstitutional, I believe wholly wrongly decided unconstitutionally, and of course the DOMA decision was the basis of the next case which actually granted same-sex marriage to everybody. That’s where I would start. I would start saying this was a decision that was extraconstitutional, that that law is good, valid law and I will enforce that law.”

Right Wing Watch touches on the irony of Santorum saying that the Court’s decision in Windsor was “extraconstitutional”, given his previous deference to their authority on that case:

Before the Supreme Court struck down parts of DOMA, President Obama continued to enforce the law but refused to defend it in court, saying that it was unconstitutional. At the time, Santorum called Obama’s move a “power grab” and said that deciding the law’s constitutionality was the “province of the Supreme Court.”

Santorum also told EWTN that he is less eager to take on the Court’s ruling in Obergefell because he’s a ‘states’ rights’ guy:

“Now, it’s much more difficult in the same-sex marriage case, to have the federal government come in and say we’re going to re-institutionalize marriage as just between a man and a woman.”

Previous Post: « Wisconsin Teen Charged With Punching Male Teacher Who Told Him, ‘I’d Date You’
Next Post: John Cena Thinks He’ll Get in Trouble For This Gay Kiss in a Closet – WATCH »