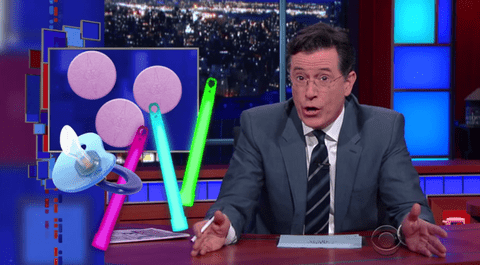 Returning to The Late Show last night after a brief hiatus, host Stephen Colbert took a moment to reflect on the deadly shootings in Colorado Springs and San Bernardino. With the latter having been inspired by ISIS, Colbert offered his own suggestion on how to defeat the terror group.

But first Colbert skewered the way in which the motivation for a heinous crime has undue influence on our reaction to that crime. When it’s a terrorist attack planned by Jihadi radicals, we sometimes do too much. But when it’s ‘just a mass shooting’, we do nothing.

RELATED: Stephen Colbert Explains Why Watching ‘Ratatouille’ Is A Valid Expression of Solidarity with Paris: WATCH

Colbert then turned to discussing what he believes may be ISIS’ achilles heel: drugs. As it turns out, many ISIS fighters are hyped up on an amphetamine called Captagon. ISIS even goes after and recruits “unstable, troubled drug users” to joins its ranks. Which gave Colbert an idea:

“Now that we know they like the go-go pills, I think it gives us a clear path to victory against ISIS. We just need to flood Syria with less of the ‘spiders-on-your-face stabby-drugs and more of the ‘peace and love’ drugs. I say we send our bombers over there to drop ecstasy. Then carpet bomb them with pacifiers and glow sticks. And if that doesn’t work I say we tackle ISIS head on with boots on the ground and then fill those boots with America’s bravest tweakers. You just tell them that ISIS has got some of the high speed chicken feed and then let them loose. Because these people are as fearless as they are toothless.”

Watch both of Colbert’s segments, below: