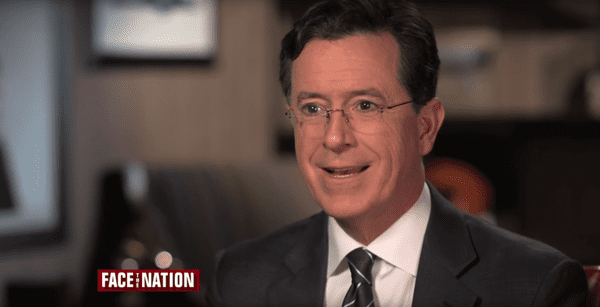 On Face the Nation Sunday, The Late Show host Stephen Colbert said that Donald Trump bears a striking resemblance to the character he played as host of The Colbert Report on Comedy Central.

Colbert made the remark in regards to a question about his opinion on “facts.” Said Colbert,

“I’m a big fan of facts, I’m not sure that have any bearing on what a person’s popularity is because Donald Trump is, like–I’m not the first person to say this but I completely agree that he’s my old character with $10 billion dollars.”

Colbert added that Trump has taken that character to another level:

“He’s completely playing on an emotional level, and so beautifully. That’s one of the reasons I can’t do that old character anymore because he’s doing it better than I ever could because he’s willing to drink his own Kool-Aid. And manufacture and distribute it because he’s got all the cash.”

Colbert’s character on The Colbert Report was famously a send-up of the right-wing talking-heads who shout at the rain on Fox News. Of that character Colbert said,

“For so many years, I pretended to be an advocate for a side, and as such I always had to take sides. This person is good, that person is bad, and there’s nothing in between. I think that area in between is where most people live, and we’re asked to go in one direction or the other. Mostly so one side or the other can raise money or one side or the other doesn’t necessarily have to explain themselves and it can be purely on the emotional appeal.”

As for what Colbert respects about Trump, he says,