Police have confirmed that two men who were thought to be vandalizing a rainbow crosswalk in the heart of Philadelphia’s gayborhood work for the water department and were performing standard utility work.

The two men were caught on camera on Monday night in a video recorded by an onlooker showing one man taking a sledgehammer to the crosswalk before being joined by another man who ‘chiseled’ away at the rainbow pavement.

The man started hammering a rainbow-colored crosswalk at 13th and Locust streets in what’s commonly called the city’s “Gayborhood” around 10:25 p.m. An onlooker captured cellphone video of the hammering as people walked by, apparently unfazed.

“There was a man in the middle of the road with a sledgehammer beating the rainbow sidewalks with it, and another man came up behind and began chiseling with him,” recalled witness Michael Depiano.

Depiano called 911. A police officer arrived moments later, but the vandals had walked away, leaving some minor damage to the brightly colored crosswalk.

The rainbow crosswalks were installed in June to show Philadelphia as a LGBTQ-friendly city. 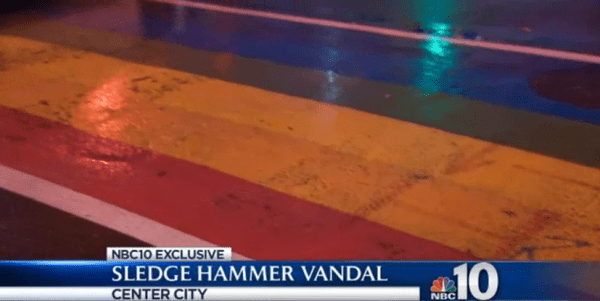 Watch a news report from NBC below: