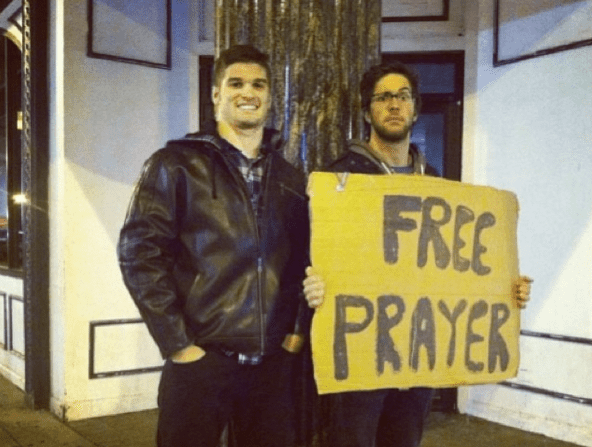 Earlier this week we told you about Ethan Renoe, the hot shirtless jogger who crashed a TV weather forecast in Chicago. During the rainy broadcast Renoe said, “It’s a great day for a run. Too wet to wear a shirt, you know?” He added, “I love running in the rain, and I’m also single!”

Renoe, an evangelical Christian, also made sure to get in a shout out to Jesus during the impromptu interview he did with WGN. 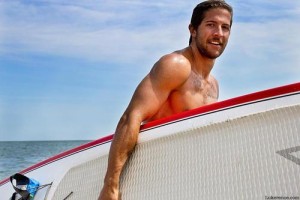 Now, NBC Chicago reports that Renoe, who attended a Christian Bible college and says he is a virgin who is saving himself for marriage, founded a ministry that has been offering “free prayers” outside gay bars in the city’s Boystown gayborhood for the last four years.

The founder of a student-created and led ministry that aims to get bar-goers to pray on Friday nights is the man whose image went viral after crashing a news report during a shirtless jog in Chicago.

Former Moody Bible Institute student Ethan Renoe started a movement in which students stand outside bars in Wrigleyville, Boystown, and near State and Division every week — regardless of the season — holding a sign that reads “Free Prayer.” They have been doing this for the past four years. 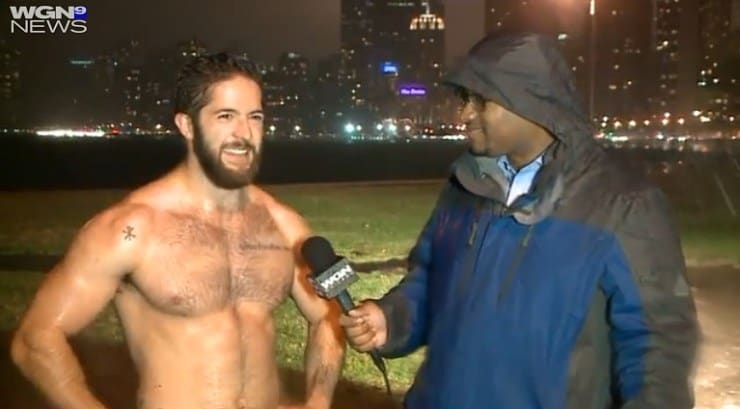 The current leader of the ministry, Noah Reynolds, says the group chooses where to offer free prayers based on foot traffic. However, he adds that they mainly hang out in Boystown outside of a gay bar named Progress, in part because of the historically tense relationship between the Christian and gay communities. Said Reynolds,

“My primary purpose of going there is to show this community love that has been severely damaged by those who claim to be Christians. That area has been hurt by people who claim Christ’s name.”

The bar’s manager calls their presence a “non-issue” because the group hasn’t caused a disturbance.

Reynolds told NBC Chicago that while the ministry that he and Renoe are involved in is often compared to the Westboro Baptist Church, he believes that comparison couldn’t be more inaccurate:

“No! 100,000 percent no,” Reynolds said when asked if their message is similar to that of Westboro Baptist, which is known for picketing funerals of soldiers. “Westboro Baptist is nearly the antithesis of what we are. Our message is a message of grace through faith. It doesn’t matter how far you have fallen, Christ loved you enough to die for you to set you free.”

In a video made two years ago by the ministry, member Carson Lee says, “There is an intense hunger and thirst for Jesus there and they don’t even know it.” It’s unclear whether this comment refers to Chicago or more specifically Boystown.

The video also opens with a somewhat ominous voice-over as an anonymous member says,

Renoe is featured in the video as well and says, “Basically our mission is to love on the people of Chicago as best we can.” He adds, “You can never underestimate the power of prayer.” 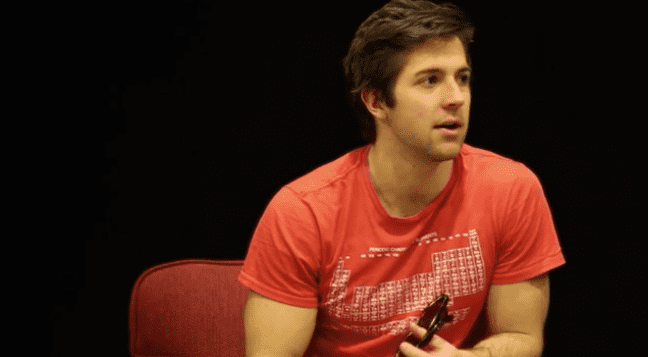 One student member remarked that he understood the backlash the group sometimes receives while in the gay community:

“Some people come at us angrily, but I can understand that because that community is their stronghold and that’s where their identity lies and they feel like we’re attacking it, but that’s before they talk to us,” said student Andy Wood. “Regardless of lifestyle decisions we have the same opportunity to share the gospel and love people.”

Watch the video put out by the ministry group, below: