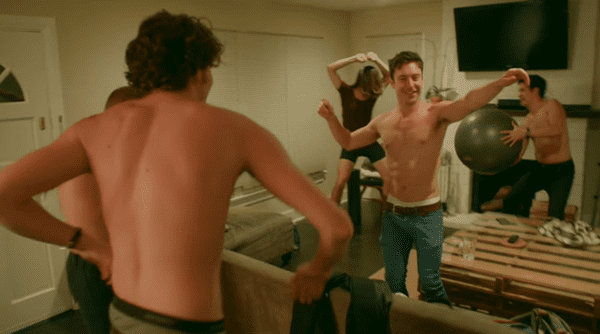 Comedian Brian Jordan Alvarez returns with a new web series that looks at the hilarious perils that come with looking for love.

In The Gay and Wondrous Life of Caleb Gallo, Caleb (Alvarez) is the nexus between his group of friends who are all looking for love and lust in mostly the wrong places. The first episode follows Caleb as he helps adios an unwanted straight man from his female friend’s apartment post-hook-up, facilitate a date between his recently out bi friend and a thirsty gender-fluid comrade, save his friends from mutually-assured dating destruction, and manage to still have time to fantasize about the straight boy of his dreams, FaceTime with an adorable British boy toy, and attend a shirtless dancing party.

You’ll recall Alvarez previously created a gay web sitcom Boy Toys that delved into the at-times absurd world of gay dating in LA. Alvarez told Towleroad that he decided not to proceed with that show for creative reasons. The Gay and Wondrous Life of Caleb Gallo is more personal, according to Alvarez: “I wanted to do something that was just deeply ME.  Like, my whole personality and everything I like in the world of a show.”

RELATED: New Gay Web Sitcom ‘Boy Toys’ Looks at the Absurd Side of Life and Love in LA: WATCH

Alvarez wrote and directed the pilot for The Gay and Wondrous World of Caleb Gallo. Additional episodes are currently being filmed and edited and will be released shortly.

Watch the hilarious new series below.