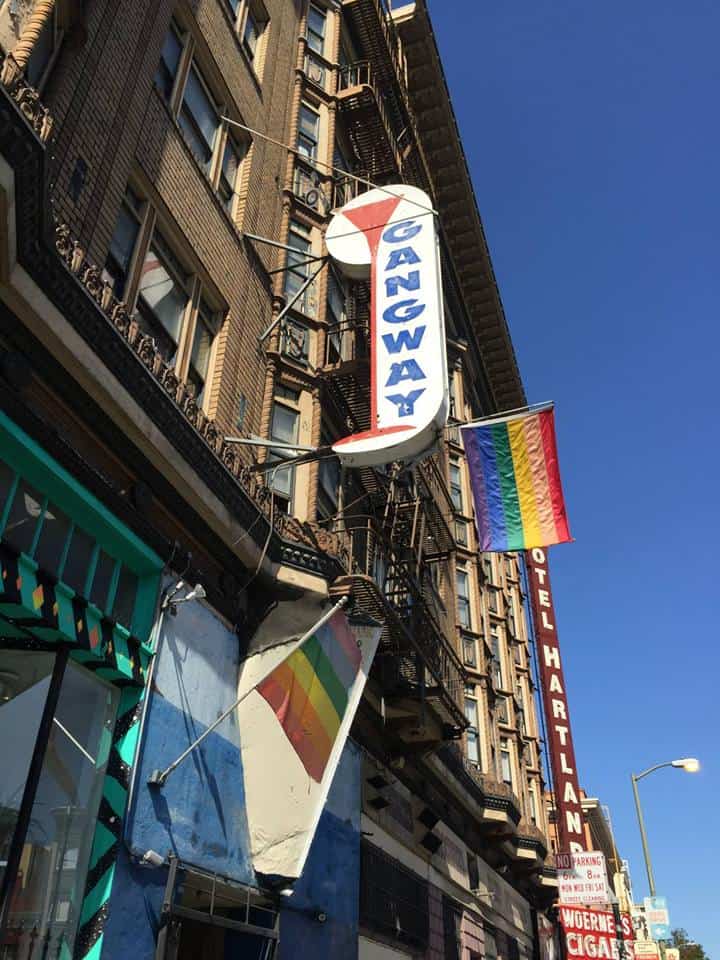 In the 1960s and 70s, before the Castro became San Francisco’s queer mecca, the Polk District was the center of the city’s gay scene.

And one of the anchors on the block of Larkin Street between Geary and Myrtle was Gangway, a nautically themed establishment that opened in 1910 and has been a gay bar since at least 1961, making it the city’s oldest.

Sadly, SFist reports that Gangway — shown above with a boat protruding from the facade — “seems likely to close very soon,” after it was bought by straight owners who plan to replace it with something called “Daddy Bones”:

Gangway is a well loved but rarely busy old-man bar which has consistently landed on SFist lists of beloved dives and Best Old Man Bars. And along with The Cinch, it’s the last of two gay bars in the Polk Gulch environs, which was home to about a half dozen as recently as the last decade. In the 1960s and 70s, before the Castro became the city’s gay ghetto, it was the Polk where the first Gay Pride parade happened, and where the center of gay life existed each night.

Sadly, even though San Francisco was once a city that boasted gay bars tucked into neighborhoods all over town, from the Financial District to Pacific Heights, that’s no longer the case. Other holdouts like Marlena’s in Hayes Valley (now Brass Tacks) have closed in recent years and seen similar fates as what seems to be befalling the old Gangway.

The National Trust for Historic Preservation reports that police conducted an anti-gay raid at Gangway as early as 1911, and the establishment has a long history of LGBT activism:

Throughout the years, as many local businesses turned away members of the LGBTQ community, the Gangway threw open its doors. Records indicate the bar was also a member of the Tavern Guild, an association of gay bar owners and liquor wholesalers that formed in San Francisco in 1962 in the wake of police raids and other forms of harassment of gay bars throughout the city.

“In a lot of ways, it became a community gathering space for the gay and transgender community,” says Laura Dominguez, communications and program manager at nonprofit San Francisco Heritage, which listed the Gangway to its Legacy Bars and Restaurants educational initiative.

In the following decades, the Gangway held numerous benefits, fundraisers, and holiday parties for San Francisco General Hospital’s Ward 5B, the first inpatient AIDS unit in the United States.

“The Gangway was really involved in that early activism and early support for people who were suffering from AIDS,” Dominguez says.

Hoodline has the gory details on what led to the sale of Gangway, and says there’s still a chance the new owners will preserve it:

Given that a straight couple ran the 104-year-old gay bar for 18 years, that doesn’t say much about the potential new owners’ intentions. …

While a Gangway bartender we spoke with this morning was hopeful that little would change once the handover is complete, a debate did flare up this winter over whether all the homey small businesses packed into Little Saigon, just a block down Larkin, will or won’t disappear with rapidly rising rents in the area.