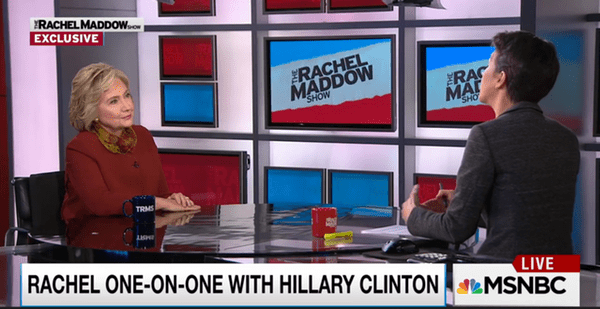 Maddow said later in the interview that she wanted to give Clinton the opportunity to clarify or change her campaign’s stance in going after Sanders for, from the point of view of her campaign, breaking his pledge not to launch negative attacks against Clinton. Clinton, however, doubled down on that approach.

“Your campaign, in my estimation, set its hair on fire a little bit,” Maddow told Clinton, assessing the decision to cast Sanders’ latest campaign ad as his first negative ad of the campaign to be a bit of a reach with only days to go before the first votes of the cycle.

“Now, I’ve seen the ad that you’re referring to. Honestly, it is not much of an attack,” Maddow argued, noting that the Sanders ad never mentions Clinton by name.

“It says there’s two Democratic visions for regulating Wall Street … It’s not something over the top that means that he’s now this personal attacker in the campaign,” she explained. […]

Clinton pushed-back against Maddow’s dismissal of Sanders’ ad as an attack, noting that his critique that Wall Street donations leave a candidate impotent or corrupted when it comes to oversight is the same charge that was thrown at President Obama.

Maddow also asked Clinton whether, should she become the Democratic nominee, she would rule out choosing a female running-mate. Said Clinton, “Absolutely Not.”

Later in the show, Maddow brought in Chris Hayes to discuss the distinction Clinton is making between herself and Sanders:

“Heres what was smart about that politically and I think actually substantively correct. When she says that’s also an attack on Barack Obama it is. And like fundamentally it is true that the Sanders worldview is a worldview in which the current Democratic party—the last 8 years of you know arguably the most successful democratic president since FDR—has been part of the same corrupt system…and he wants to somehow break that up.”

Hayes added, “The political advantage she has is the degree to which she can hug Barack Obama close to her. ”