“Broken Hearts/Bones”, a new music video from NYC-based band Parlour Tricks, reveals what happens when the right song comes on at the supermarket, and features a real-life gay couple as a pair of strangers who end up getting it on in the popcorn aisle. 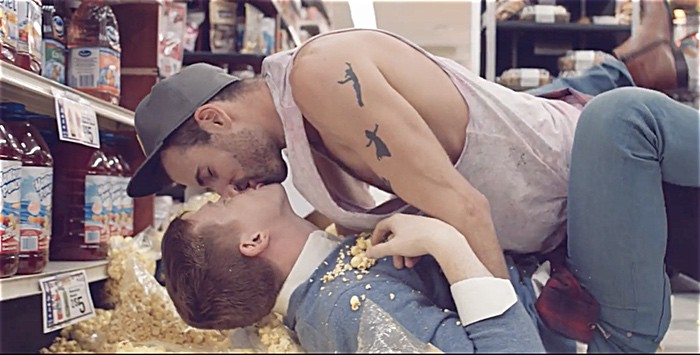 “A few months ago I was standing in the checkout line at the grocery store. A very popular, very sad love song came on the radio. When it reached the bridge I suddenly became aware that everyone around me had started singing to themselves. Softly, but earnestly. There was a middle aged man, some teenagers, woman with a baby, dude with a motorcycle helmet under his arm, all of the women working the checkout counter. Everyone was singing and no one was acknowledging it. I had never seen anything like it. After the song ended the line shuffled forward, the next song came on, there were beeps from the scanners, the manager talking over the intercom. No one made eye contact. I might as well have dreamt it. I left feeling crazy; it was so funny, but also so moving. I had borne witness to a weirdly intimate, collective catharsis. All because that song came on the radio. I couldn’t stop thinking about it. A few weeks later I called Dani (Brandwein, director) and told her about it, and the treatment for a ‘Broken Hearts/Bones’ music video practically wrote itself.”

Matt Burrows, who’s in the clip with his real-life boyfriend, told OUT:

“Every now and then I find a piece of popcorn in between my teeth and I wonder if it’s leftover from our shoot. Sure I floss, but popcorn is a pain in the butt (okay, I found some in my underwear too). Broken Hearts/Bones” is such a human and relatable story for everyone, so I’m glad they wanted to include as many different ‘everyones’ as possible. We’re all human. We all go to the grocery store. We’ve all fallen in love and had our hearts broken. Hopefully we all haven’t made quite a mess in a Key Foods in Brooklyn, but life’s crazy! Anything can happen!”

Previous Post: « For the First Time, Marriage Equality Has the Votes to Pass in Australia’s Parliament
Next Post: Chicago Man Stabs Boyfriend to Death After Confronted with Allegations of Cheating »