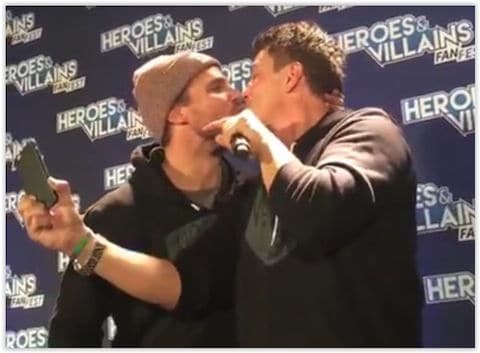 Despite the snowy weather this weekend, Arrow co-stars Stephen Amell and openly-gay sci-fi icon John Barrowman found a way to heat things up. The pair locked lips on stage at the Heroes and Villains Fan Fest in Secaucus, New Jersey, according to Nerdist.

Amell, who plays the ripped archer Oliver Queen on Arrow, joined Barrowman first for a rendition of “Music Of the Night” from The Phantom of the Opera. Although, Amell’s Queen has a complicated relationship with Barrowman’s character, Malcolm Merlyn, the pair ended their duet with a friendly kiss on the lips.

If loose lips really do sink ships, Barrowman should be barred from any comic con at sea, since he has a history of on-stage smooching at these events.

Check out their performance in the video below.