Four teens have been charged with raping two boys, aged 12 and 16, on a bus ride back from a wrestling tournament in Oklahoma. Both the victims and the assailants were wrestlers.

The incident occurred on Jan. 9 when students from Norman North High School were en route back to their school on a bus from a tournament in Pauls Valley.

The four students turned themselves in to jail Tuesday, and were each given a $5,000 bond. They have bonded out of jail. 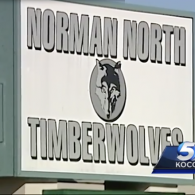 CNN reports on the horrific details of the rape:

Court documents say that soon after the bus left, Shipman helped the others restrain a 16-year-old wrestler under the seats at the back of the bus. Two of the accused allegedly inserted their fingers into the victim’s anus over his clothing.

Soon afterward, the bus driver activated the interior lights and escorted the victim back to his seat, the documents say. Once the lights were turned back off, the alleged victim was persuaded to come to the back of the bus.

One accused teen allegedly then restrained the victim, while another put a condom over the fingers of one hand and inserted his fingers into the 12-year-old’s anus, over his clothing, the documents say.

When the bus arrived at Norman North High, the 12-year-old victim was assaulted a second time, the indictment says, as Shipman and the others forced the boy to a secluded area around the corner of the school building. The 12-year-old was restrained while Shipman and another accused teen again inserted fingers into the 12-year-old’s anus, the court documents say.

The 12-year-old victim was only able to escape once his parents arrived at the school to pick him up.

One wrestling coach at the school has quit and another has been fired.

Watch a news report from KOCO 5 news, below: