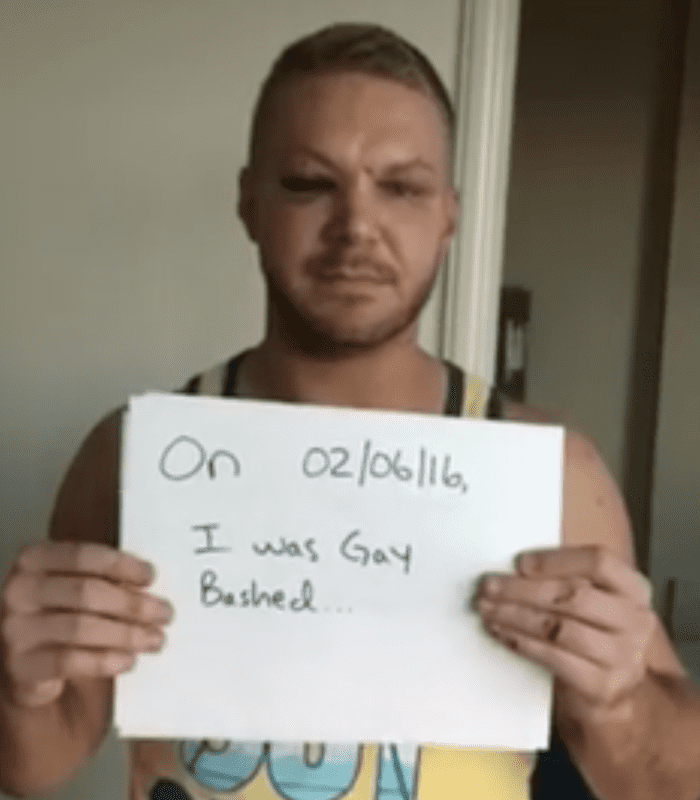 A gay man who was brutally attacked in San Francisco over Super Bowl weekend says he was gay bashed because he wore white pants.

Jeffrey Lafayette told the harrowing story of his attack in a Facebook video that has already racked up over 1.2 million views in just 2 days. In the video, Lafayette appears visibly battered and bruised with one eye appearing swollen shut. Despite the hate he encountered, Lafayette is sending out a message of strength and positivity.

I was gay bashed in San Francisco. They spat on me and kicked me as I screamed for help… all because I decided to wear white pants. And I don’t think it had anything to do with Labor Day. I am covered in bruises, some blood, and tear stains. But no matter how hard they hit, no matter how cruel life will be, you must always GET UP! And continue to love and smile! Never forget to SMILE.’

The strength of your love is more powerful than any fist! Thank you! Please Share. The LGBT youth needs to see this so they are aware of the hatred that is still out there but tell them that no matter how much hatred or cruelty you are faced with, the love from those you surround yourself with is STRONGER than anything! Thank you God, my family, and my friends!

SFist was able to get in touch with Lafayette and has additional details on the attack:

Lafayette says there was a group of “20 straight guys” who were the perpetrators, and a witness, his friend Ryan Eick confirms that Lafayette fought back. Also, he says, “No police were called. Guaranteed the people who started the whole thing were from out of town and here for the super bowl and don’t realize it’s a hate crime to gay bash.” The exact location of the crime remains unclear.

Meanwhile, having reached a modest crowdfunding goal of $900 to deal with his injuries, Lafayette has extended the goal to $10,000 and has pledged to use the attention this has received, and any money beyond his original goal, to buy bags of groceries to pass out to the homeless. Donate here.