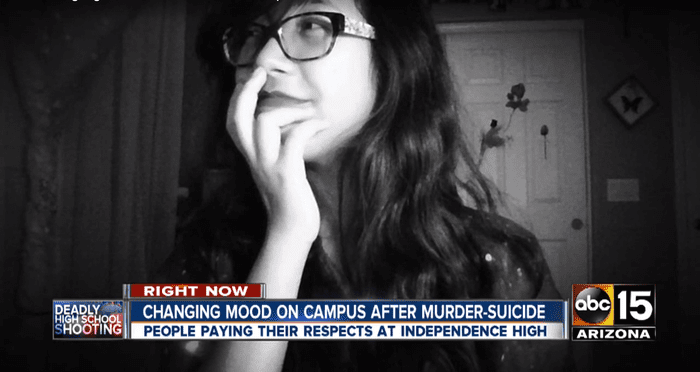 Two teen girls from Arizona who were reportedly in a relationship died on Friday in what police are calling a murder-suicide.

Police have not said what they believe the motive was in the crime. However, a local news report suggests that a rift between the two girls and jealousy may have been contributing factors.

Glendale police spokesperson Tracey Breeden said officers responded to calls of a shooting at Independence High School near 75th and Glendale avenues just before 8 a.m., right around the time school was scheduled to begin for the day.

Police found two 15-year-old female sophomores lying next to each other on campus, each dead from a single gunshot wound, said Breeden. A weapon was found next to them.

Breeden said a suicide note was also located at the scene, leading detectives to believe one of the teens shot the other before turning the gun on herself. […]

According to Breeden, the investigation has revealed the two girls were very close friends and appeared to also be in a relationship.

Read tweets from local reporters about the incident and watch two news reports from ABC 7, below.

Glendale Union High School District: "Our hearts and thoughts are with the families affected by this tragedy." pic.twitter.com/C1uDexmEFi

This memorial has been placed outside of Independence High this morning. https://t.co/xrB4s62oi7 #abc15 pic.twitter.com/DMvkpfpTyX

Police say the 2 girls were very close, appeared to be in a relationship. They were found near the cafeteria area. Each had 1 gunshot wound.