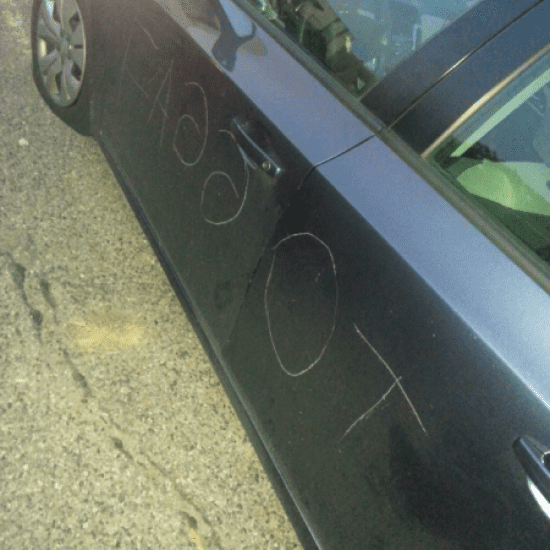 A transgender man in Albuquerque says he and his boyfriend have been targeted by vandals three times in four months, with the perpetrators carving homophobic slurs (above) into their vehicles, slashing their tires and pouring bleach in their gas tanks. 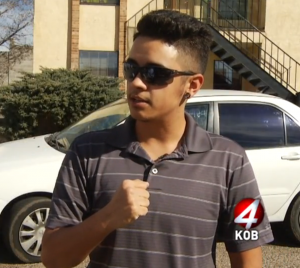 Sloan told KOB Channel 4 it all started in November, when someone carved “f*ggot” into their vehicles and slashed their tires in the parking lot of their apartment complex.

“We called the police,” he said. “They said it wasn’t a hate crime despite the slur. We took care of it. Not a problem. Second time it happened was a few days before Christmas. My tires were slashed again.”

Then, this week, after both of the couple’s vehicles broke down, they discovered someone had poured bleach in their gas tanks.

“Someone had actually taken a tool and ripped open my gas tank to pour bleach in there so my car’s engine doesn’t even work,” Sloan said. “At this point I think it is a hate crime. It’s too coincidental because nobody else has been hit on this street. Nobody else has had issues with their cars.”

Sloan had been saving his money for top surgery, but now the couple also needs to cover moving expenses so they can escape the harassment. According to a CrowdRise fundraising page, they’ve been together for more than a year and perform in drag to raise money for charities on the weekends.

“First I’d like to start off by saying we are not the type of people to ask for help unless it’s our last resource,” Sloan’s boyfriend wrote. “We wanted to move but we do not have the means to do so. … I am here asking for donations to get us out of this neighborhood and fix our cars.”

New Mexico has a hate crimes law that includes both sexual orientation and gender identity. But in 2014, the most recent year for which statistics are available, Albuquerque police reported only one anti-gay hate crime to the FBI, and zero anti-trans hate crimes.

Previous Post: « Hillary Clinton Defends Position on Gay Rights Amid Grilling Over Speeches: WATCH
Next Post: Flossie Dickey is 110 Years Old, and She’s Got Some Advice for Living as Long as She Has: WATCH »