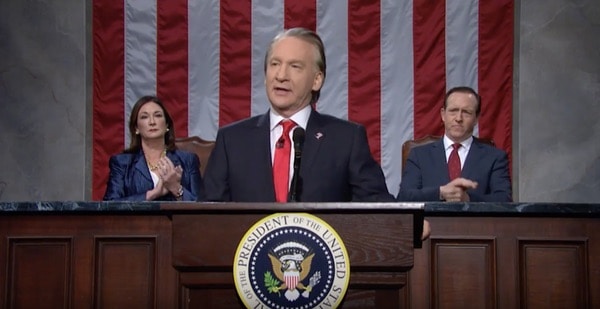 Calling him “Andrew Dice Trump”, Bill Maher pointed out the hypocrisy of The Donald coming down on former Mexican President Vicente Fox for dropping the F-bomb with regard to Trump’s proposed wall between the U.S. and Mexico.

To further demonstrate, Maher delivered a State of the Union address using the crass language of the campaign trail.

“Our deficit is shrinking like a c*ck on a cold morning. Too many families feel like they’re taking it in the ass, and that sh*t needs to stop….No one should have to suck a d*ck to make ends meet.”

“If you f**k with the United States, you are f**king with the most balls-out badass swinging d*cks the world has ever seen, and we will not hesitate to skullf**k you, tear your head off, and sh*t down your neck!”

Previous Post: « Is ‘Star Wars’ About to Get a Gay Character, or Two?
Next Post: Rapper Killer Mike Apologizes for Past Use of the Word ‘Fag’ »