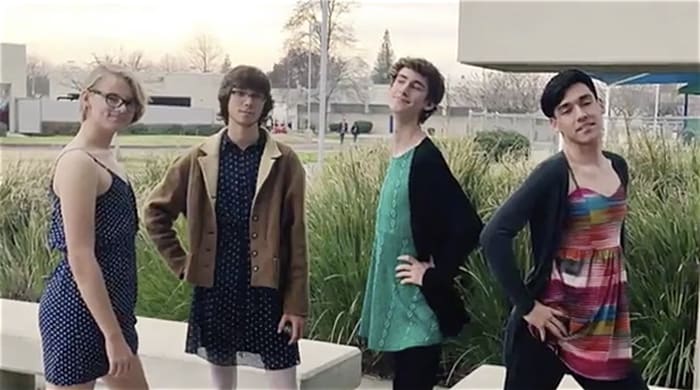 Boys wore dresses and girls wore men’s collared shirts to school this week at Buchanan High School this week in Clovis, California after the Clovis Unified School District trustees ignored recommendations and held on to a restrictive dress code, the Fresno Bee reports:

In a surprise vote last week, trustees went against recommendations that would have allowed boys to wear long hair and earrings and removed language that says dresses and skirts are for girls. The decades-old policy directly violates state education code, according to the ACLU. A student petition urging the board to approve a gender-neutral dress code had garnered nearly 2,500 signatures by Monday.

“The reason we switched gender norms for the day was to make the statement that what we wear does not define us as students. Our district’s dress code should not favor or discriminate any gender. We believe everyone should be able to express themselves equally. A boy with long hair is no less of a hard worker than a girl with long hair.”

Watch a report from the Bee:

Previous Post: « Meth Use by Gay Men in NYC Has More Than Doubled in the Past 3 Years
Next Post: Tim Tebow Has Awkward Conversation with Ellen About Dating: WATCH »