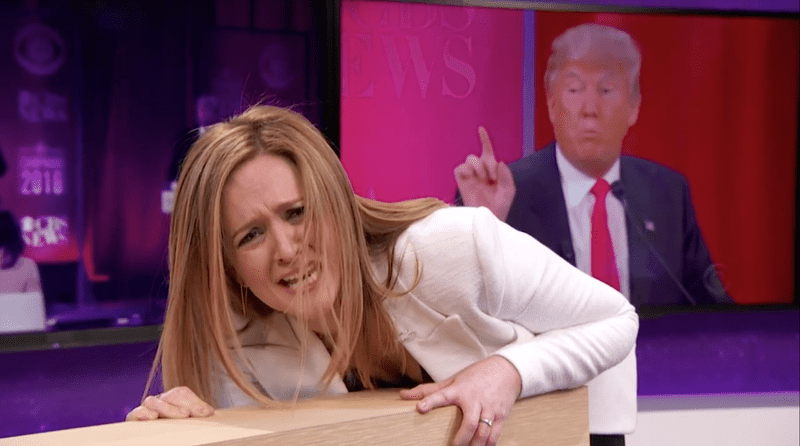 The irony of Republican obstructionism was not lost on Bee who said, “What better way to honor America’s greatest champion of original intent than by wiping your obstructionist ass on the very document he held so dear.”

Bee also made sure to get in a dig about Scalia’s opposition to gay marriage, joking, “You know, no one loved the Constitution more than Scalia. He would have married it if he could. Then he would have struck down that marriage, because marriage is between a man and a woman.”

It was, however, the Republican debate that pushed Bee over the edge. She could not believe that she was actually agreeing with things Donald Trump was saying.

Meanwhile, at Saturday’s debate, hours after word broke of Scalia’s death, GOP candidates honored his memory with some “Cuban on Canadian-Cuban violence.” And, as that crazy train wound its way through Saturday night’s TV landscape, Trump referenced women’s health in a positive way, which incensed Bee, given that “last time he referenced women’s health he was talking about the torrent of menstrual blood that shoots out of our wherevers like dragon fire.” Making matters worse, he went after George W. Bush over the war in Iraq and those “weapons of mass destruction” during the debate.

“OK, listen up creamsicle! We had a deal. You open your face hole, garbage spills out, I make jokes, I get to keep my comedy job. You’re not allowed to make sense!” she reminded the GOP front-runner.