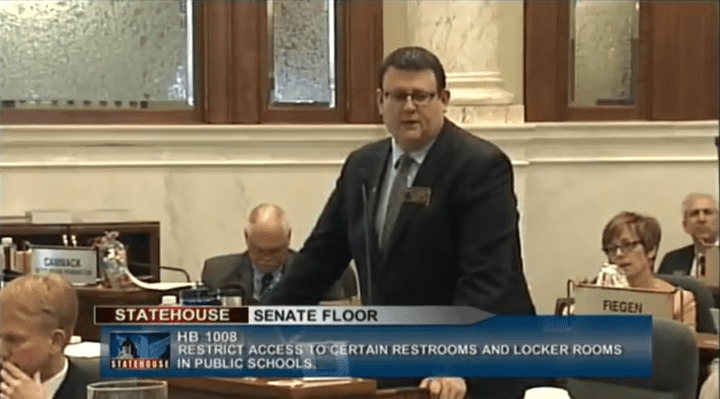 South Dakota lawmakers passed an anti-trans bathroom bill on Tuesday that bans transgender students from using bathrooms in accordance with their gender identity.

House Bill (HB) 1008 passed the state’s house of representatives earlier this month and today cleared the senate by a vote of 15-20.

If signed by Governor Dennis Daugaard, HB 1008 would be the first statewide bill in the United States to ban transgender students from using bathrooms corresponding to their gender identity.

House Bill 1008 states that “every restroom, locker room, and shower room located in a public elementary or secondary school that is designated for student use and is accessible by multiple students at the same time shall be designated for and used only by students of the same biological sex.”

The bill defines “biological sex” as “the physical condition of being male or female as determined by a person’s chromosomes and anatomy as identified at birth.”

Although the measure does not mention transgender people, specifically, the legislation is the latest in a national movement to ban transgender people from using restrooms that reflect the gender identity. Conservative organizations have united around a battlecry of banning “men in women’s bathrooms” to push such policies in schools — and to block or repeal LGBT nondiscrimination laws.

It’s unclear what action Daugaard will take on the legislation. For weeks, his office hasn’t responded to multiple requests from the Washington Blade on his position on the legislation and whether he would sign or veto it. In February 2016, Daugaard said during an news conference he has never met a transgender person and wouldn’t make a commitment on the legislation.

The governor was expected to officially receive the bill Thursday. He must either sign or veto the bill within five business days of transmittal, or else it becomes law without his signature in a procedure known as “pocket pass.”

Alternatively, if he were inclined to veto it but didn’t want to take that step publicly, Daugaard could ask the legislature to go back and work on it. According to a source with the South Dakota legislative process, that occurred only once last year.

South Dakota is better than #HB1008, which would be first law in the nation attacking transgender students. @SDGovDaugaard must veto.

.@SDGovDaugaard should remember history has never looked kindly upon those who attack the basic civil rights of their fellow Americans.