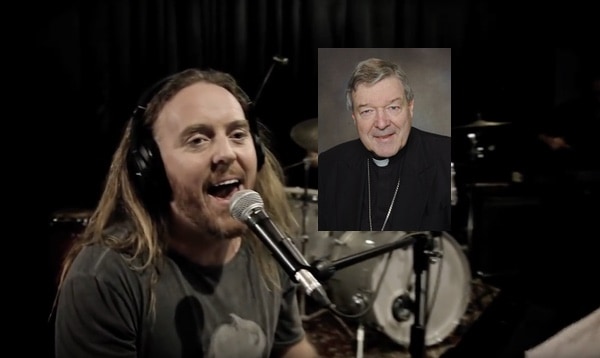 Pell is reportedly being investigated for “multiple offenses” while serving as a priest in Australia and as Archbishop of Melbourne, The Guardian reports:

A dossier compiled by the detectives says Pell allegedly sexually abused minors “by both grooming and opportunity”.

“We can not comment on investigations into any individuals,” Victoria police told Guardian Australia on Friday night.

The allegations were “clearly designed to do maximum damage to the cardinal and the Catholic church and undermine the work of the [Australian] royal commission [into institutional responses to child sexual abuse],” a spokesman from the Vatican in Rome told the Guardian.

Proceeds from the sale of the track go to a fund which will send the survivors of sexual abuse by clergy in Ballarat to Rome to witness Cardinal Pell give evidence in the public forum.

ALSO BY MINCHIN: White Wine In The Sun: A Christmas Carol

Cardinal George Pell is the most powerful dude in the Catholic Church of Australia. He’s currently working at the Vatican, but The Royal Commission into Institutional Responses to Child Sexual Abuse has demanded his presence in Australia. But George has sent a doctor’s note saying he’s too unwell to fly.

The whole thing stinks to high hell, and many people in Australia are very, very angry…not least of all, the survivors in Ballarat, where abuse was sickeningly rife.

Pell was born and educated in Ballarat, and at one point actually lived with Gerry Ridsdale, one of the most prolific (and allegedly protected) paedophiles in Australian history. He has been accused of covering up the actions of others, and of sexually abusing a kid himself.

The church in Australia (like elsewhere in the world) knew of the actions of many of their priests, and rather than going to the police, shuffled them from diocese to diocese, facilitating their abuse rather than arresting.

The idea that Pell was unaware of the behaviour of Ridsdale (and others) is laughable to me.

Cardinal Pell is due to give evidence to the royal commission in just over one week.

The timing of these leaks is clearly designed to do maximum damage to the Cardinal and the Catholic Church and undermines the work of the royal commission.

The allegations are without foundation and utterly false.

The Cardinal has called for a public inquiry into the leaking of these spurious claims by elements in the Victorian Police in a manner clearly designed to embarrass the Cardinal, in a case study where the historical failures of the Victorian Police have been the subject of substantial evidence. These types of unfair attacks diminish the work of those good officers of the police who are diligently working to bring justice to victims.

The Phillip Island allegations have been on the public record for nearly 15 years. The Southwell Report which exonerated Cardinal Pell has been in the public domain since 2002.

The Victorian police have taken no steps in all of that time to pursue the false allegations made, however the Cardinal certainly has no objection to them reviewing the materials that led Justice Southwell to exonerate him. The Cardinal is certain that the police will quickly reach the conclusion that the allegations are false.

The Victorian Police have never sought to interview him in relation to any allegations of child sexual abuse and apart from the false allegations investigated by Justice Southwell, the Cardinal knows of no claims or incidents which relate to him.

He strongly denies any wrongdoing. If the police wish to question him he will co-operate, as he has with each and every public inquiry.

In the meantime, the Cardinal understands that several media outlets have received confidential information leaked by someone within the Victorian Police. For elements of the police to publicly attack a witness in the same case study that has exposed serious police inaction and wrongdoing is outrageous and should be seen for what it is.

Given the serious nature of this conduct, the Cardinal has called for a public inquiry to be conducted in relation to the actions of those elements of the Victorian Police who are undermining the royal commission’s work.

The Cardinal calls on the premier and the police minister to immediately investigate the leaking of these baseless allegations.