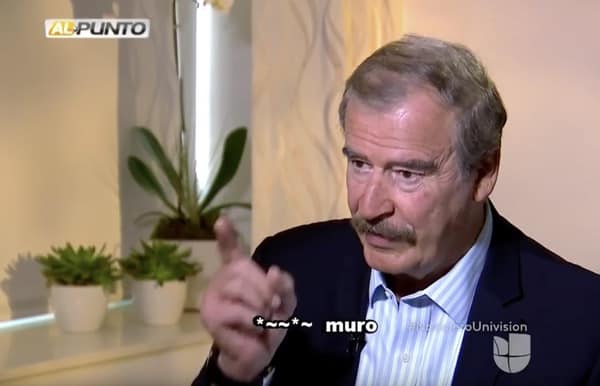 Former Mexican President Vicente Fox appeared on Univision on Thursday and had some strong words for Donald Trump over his plans to build a wall between the United States and Mexico.

Said Fox: “I’m not going to pay for that f**king wall! He should pay for it. He’s got the money.”

The statement, of course, provoked a swift response on Twitter from Trump:

When asked if he was afraid that Trump would become President, Fox replied:

“No no no, democracy cannot take that, crazy people that don’t know what is going on in the world today. This worries me, the last caucus in Nevada… he won 44 percent of Hispanics…I’d like to know who those Hispanics are, because they are followers of a false prophet. He’s going to take them to the desert, and if they think that they will benefit with an administration led by Donald Trump, they’re wrong. They must open their eyes. Please, you Hispanics in the U.S., open your eyes….It is not to defend our race, it is not to defend our creed, but to defend the same nation that is hosting you. This nation is going to fail if it goes into the hands of a crazy guy. What is Trump? He’s not a Republican. Absolutely not. Those are not the Republican principles. He is not a Democrat. He is just himself. He is egocentric.”