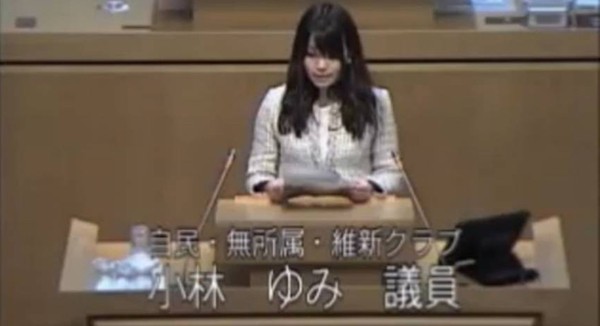 As Japan makes strides toward recognizing same-sex unions, bigot lawmakers are coming out of the closet. During the Suginami Municipal Assembly in Tokyo, Assemblywoman Yumi Kobayashi criticized  Tokyo’s Shibuya and Setagaya for recognizing gay unions, saying the recognition could be unconstitutional.

Suginami Ward Assemblywoman Yumi Kobayashi, 27, said during an assembly session Feb. 15 that such sexual minorities are “fundamentally different” from transgender people, “who are clearly disabled and should be legally protected.”

”‘Lesbian,’ ‘gay’ and ‘bisexual’ are terms denoting sexual orientation, and it’s not medically clear whether they are disabled or not,” Kobayashi said. “Is it really necessary for local governments to spend a lot of time and money on issues relating to sexual orientation — or personal taste?”

“The biggest problem is that she believes gay, lesbian and bisexual people are that way out of personal taste or choice, propagating the idea that they can choose their sexual orientation. Her labeling of all transgender people as being disabled is also wrong. Transgender people refer to all of those with gender identity issues, not just those diagnosed with GID.”