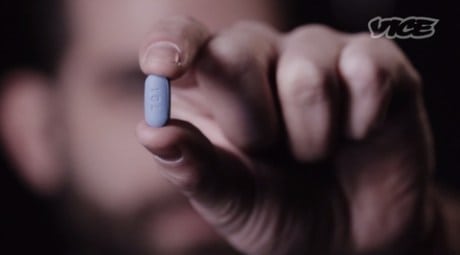 Last week, we told you about the first reported case of a daily PrEP (preexposure prophylaxis) user contracting a rare drug-resistant form of HIV.

Now, that individual is speaking out and sharing his story in a new interview with POZ Magazine.

The 44-year-old man identifies himself only as Joe, preferring to remain mostly anonymous. He now lives in Toronto but also lived in Kuwait and Denmark before his family moved to Canada when he was 11.

Joe tells POZ that he was on PrEP for two years prior to seroconversion. He adhered to the drug daily (he even had an app to remind him) and his body tolerated it well.

Asked whether going on PrEP altered his sexual behavior of attitudes, Joe says,

Yes. I became more sexually liberated. It took away the fear. I mean, that’s really one of the reasons why people behave themselves [sexually]. It’s not because of morals or religion or society; it’s just the fear of getting sick—especially the fear of HIV. But once you’re on PrEP you’re more comfortable. You feel safer.

Before going on PrEP, Joe says his condom use was “off and on, depending on the situation.” He added,

I’m mostly a bottom, but if I was with someone I felt more at ease with, [we wouldn’t use condoms], but it was serosorting of course [having sex with someone of your same HIV status]. But I would say most of the time, it was with condoms.

But once he was on PrEP, Joe says he “stopped using condoms” altogether:

As for how Joe found out he is HIV positive, he says,

I knew there was always a possibility of becoming infected on PrEP, but the science was in my favor. And my doctor had changed. Dr. Hedgcock had moved and Dr. David Knox took his place.

On May 4, I had the regular quarterly blood test for HIV and STIs [sexually transmitted infections] and kidney and liver function, and all that. On Friday, May 8, at 6 p.m. my doctor gives me a call at home and says, “Joe, your p24 antigen came back positive.”

I said, “OK, what does that mean?” And he goes, “You’re HIV positive.” And it was…it was a bit of a shock. I said, “That can’t be, there’s no way. Are you sure it’s not a false positive?” He said that in 90 percent of cases where the p24 antigen comes back positive, the person is HIV infected.

Ultimately, Joe would find out that he had come into contact with a rare strain of drug-resistant HIV. However, in the immediate aftermath of his diagnosis, he went on a strong course of medication to suppress his viral load. That course of medication worked within three weeks. Now, he is on a once daily drug regimen.

Speaking of how he came to accept his diagnosis, Joe says that education was key:

The biggest condition I have, the worst condition, is still not fatal—it’s managed and controlled. But there’s no religion or whatever that I can rely on, so really it’s science and facts.

In terms of support groups, I have a strong circle of friends, many who have been living with HIV 20-plus years who I can talk to. But my doctor referred me to an HIV psychiatrist, and because I was on certain antidepressants, I think that helped in terms of calming the waves and not having breakdowns.

To be honest, I don’t wake up in the morning and think of myself as an HIV-positive person. Sometimes even when I say it, it’s a bit odd because nothing has changed in terms of my life.

As for whether Joe has any interest in finding out who he came into contact with that had the virus, he says he already knows who it was:

Here’s the story. He’s in a relationship and “discreet.” We met on bbrt [a bareback community], and he says he’s negative. I prefer to be with people who are positive and know it and are on meds—I’m on PrEP, you’re undetectable, the chances of transmission are like negative 10 percent—but I broke my rule with this guy. So it was with him, I think—it was a bit of a busy period. I reached out to him and he says, “Well, I’m not worried, I’m OK. But I’ll go see a doctor.” And I checked in with him again: “Have you gone? What are the results?” “Oh I’m really busy and haven’t had a chance.” I checked in again. “Oh, I’m out of town on work.” Checked again, and he stopped replying to me. To be honest, I gave up. I don’t need to be vindicated or have him say I’m sorry or whatever. I just wanted to let him know. It’s being socially responsible.

Since news of his diagnosis has come out, Joe says he has primarily avoided media coverage of the story. However, every so often he’ll catch a glimpse of it. He’s been stunned by some of the reaction, such as one friend who posted a link to the story on social media with the comment, “Enjoy your AIDS, PrEPsters.” Of those responses, Joe says, “I don’t know if it comes from fear or hatred or whatever, but some people feel vindicated that PrEP is not 100 percent. And it’s the Internet, right? Everyone’s got an opinion.”

As for sharing his story, Joe says it’s important for people to know what he’s been through:

[T]he more we know, the better we’re prepared. PrEP’s a calculated risk. It’s important for people to know that there is the possibility as opposed to the fantasy that there have been no recorded infections on PrEP. At least now there is one, so it makes it more real. And I tell people, “It didn’t work for me, but I still think it’s great.” If I had to do it all over again, I would still go on PrEP. I just wouldn’t have sex with that specific person.