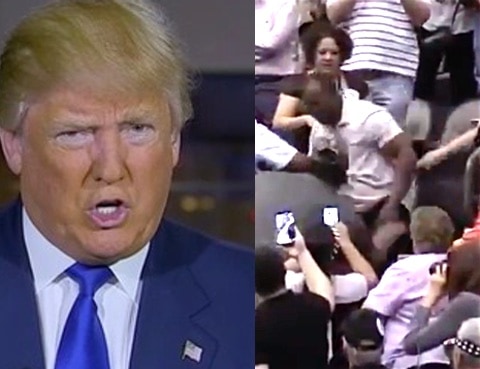 In phone call to ABC News’ This Week with George Stephanopoulos on Sunday, Donald Trump made excuses for several violent incidents in recent days in which protesters at his rallies were assaulted by Trump supporters, and one in which a protester was manhandled by Trump’s campaign manager Cory Lewandowski.

Here’s the incident with Lewandowski, in which he grabs a protester by the shirt collar:

Said Trump of that incident:

That was somebody else pulling him. I mean, I get — I give him credit for having spirit. He wanted them to take down those horrible profanity-laced signs. Look, these are disrupters. They go into a room with 20,000 people or they go into a room with 6,000 or 7,000 people and they stand up and they start shouting things. And they — I mean, at some point, somebody should say — I will say this, Sheriff Joe Arpaio in Phoenix arrested three people. As soon as he arrested those three people, everybody else immediate left.

In another incident, a protester being escorted out of the Tucson Convention Center was grabbed by a Trump supporter and punched to the ground:

Said Trump of that incident:

Well, you know, he was wearing — he or his partner was wearing Ku Klux Klan outfit. This happened to be an African-American man who was very — person at the rally who was very, very insensitive to the fact that somebody, a protester, would be wearing a Ku Klux Klan outfit. And he went…We don’t condone violence. And I say it. And we have very little violence, very, very little violence at the rallies.

Trump made excuses for the man who assaulted the protester, saying his anger was fueled by protesters who earlier blocked the road to the rally:

I’m saying this, these are professional agitators, and I think that somebody should say that when a road is blocked going into the event so that people have to wait sometimes hours to get in, I think that’s very fair, and they should be blamed there, too. When signs are put up, lifted up, with tremendous profanity on them. I mean the worst profanity. and you have television cameras all over the place. And people see these signs. I think maybe those people have some blame and should suffer some blame also.