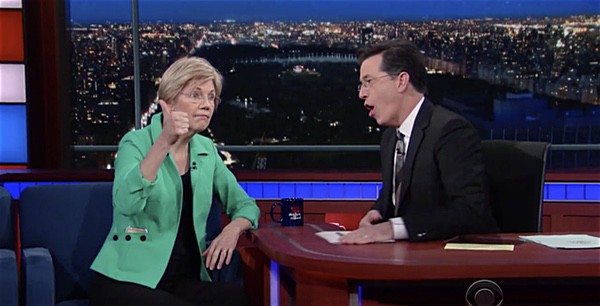 “Voltron” candidate (because she’s a mix of Sanders and Clinton) Elizabeth Warren stopped by The Late Show with Stephen Colbert to talk about the election. But she mostly wanted to trash Donald Trump.

“This is the deal. You’ve got to kind of look a little closer at Donald Trump, because this is his main claim, to how it is that he says he’s qualified to be President of the United States. He says in business he ‘wins, wins, wins’. Well the truth is, he inherited a fortune from his father, he kept it going by cheating and defrauding people, and then he tricks his creditors through Chapter 11. That really is the heart of it.”

“We have an economy that is in real trouble. But when the economy is in this kind of trouble, calling on Donald Trump for help is like, if your house is on fire, calling an arsonist to come help out.”

On calling him out as a “loser” in tweets, she said:

“Look, come on. This isn’t name calling. This is taking the credential that reclaims he’s running on, and that is his business success, and saying ‘no buster, we’re not buying that.’ He is not a business success. He is a business loser,” adding, “If all the money he’d inherited from his dad he put into index funds, he’d be just about as rich as he is today. In other words, he wasn’t out there doing these fabulous deals. He started out rich. He cheated his way to getting richer. That is not going to build an America for hard working people. He is going to leave them in the dirt like he’s left everybody else in the dirt.”