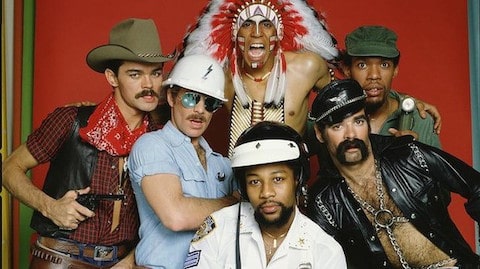 In the most literal sense, few acts are as iconic as the Village People. The disco group was famously compromised of paragons of masculinity, including a cowboy, a police officer and a leatherman. Their costumed image is one of the most recognizable in pop culture history.

Of course, all the macho imagery was rooted in the 1970s gay scene in Greenwich Village. Inspired by the manly looks he observed in the clubs, French music producer Jacques Morali with his business partner Henri Belolo developed the group for gay audiences. Despite the group’s gay origins and imagery, whether or not the Village People were “a gay group” is still a matter of debate, even among the group’s various members.

“We didn’t start as a gay group, and not everyone in the group was gay — that’s an incorrect notion,” Randy Jones, the Village People’s second cowboy, told Spin Magazine. “So much of our music was played in black, Latin, and gay underground clubs; that’s where the first Village People album found its initial audience.”

Victor Willis, the original lead singer of the group, is one of the band’s most outspoken critics of the Village People’s gay image. His publicist Alice Wolf issued a statement in 2007: “Victor Willis wrote about the YMCA and having fun there, but the type of fun he was talking about was straight fun,” insists Wolf, adding that Willis has nothing against homosexuality. ‘When he says, ‘Hang out with all the boys’… he’s talking about the boys, the fellas…. But it’s one of those ambiguous songs that was taken that way because of the gay association with Village People.’”

Even individual band members offer wildly divergent explanations about gay messaging in their music. Construction worker David Hodo told filmmaker Jamie Kastner “People always talk about the double entendre. There was not one double entendre in the music,” but then later told Spin ““Y.M.C.A.” certainly has a gay origin. That’s what Jacques was thinking when he wrote it, because our first album [1977’s Village People] was possibly the gayest album ever. I mean, look at us. We were a gay group. So was the song written to celebrate gay men at the YMCA? Yes. Absolutely. And gay people love it.”

Whether or not the Village People are officially a gay group, their link to the gay community is undeniable. Get down to a few of their most famous tunes below.

The first single by the Village People was an ode to San Francisco (packaged with B-side “Fire Island”), but their first charting single was “Macho Man.” Released in 1978, it peaked at No. 25 in the U.S., but a medley with “I Am What I Am” and “Key West” performed better on Billboard’s Dance Music/Club Play singles chat, hitting No. 4. For what it’s worth, the very masc video above doesn’t feel unlike something Nick Jonas would release today.

The gay connotations of “Y.M.C.A.” may be debatable (sure, I guess), but its lasting appeal certainly isn’t. From bar mitzvahs to baseball games, the song has been inescapable for nearly four decades. The song was an international smash, topping charts around the globe, but it only reached No. 2 in the U.S. The well-known dance was created by audience members on American Bandstand. You can see the origins of the hand motions in the clip above.

The group’s last hit was the 1979 single “In the Navy.” The video was made possible by striking a deal with the United States Navy wherein the band could film aboard the Navy’s ships and the Navy could use the song as a recruitment tool.

Can’t Stop the Music, the Village People’s disaster of a film, was made after Willis left the band. Starring Steve Guttenberg, the film was so bad, it inspired the creation of the Golden Raspberry Awards, deservedly winning the first Worst Picture Golden Raspberry Award. It’s also a cult classic. The Razzies’ founder John Wilson listed the film as one of “The 100 Most Enjoyable Bad Movies Ever Made,” and we heartily concur with its inclusion on this Buzzfeed list of 28 Bad Movies With Your Gay Friends. It’s truly, spectacularly awful.

What people don’t talk about enough is the Village People’s ability to predict the invention of Grindr. By the time the band released “Sex Over the Phone” in 1985, the group had endured lots of line-up changes. The album Sex Over the Phone would be their last full album of new material, though they continue to tour to this day.