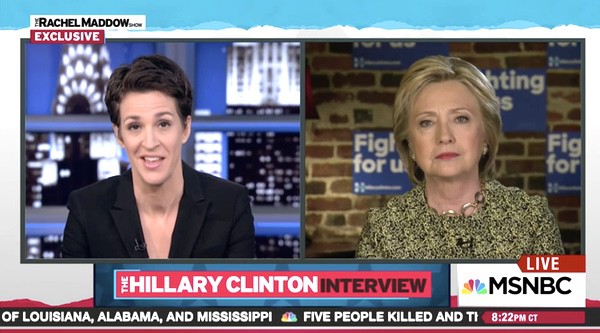 Hillary Clinton sat down with Rachel Maddow last night in an interview that covered both Clinton’s loss in Michigan on Tuesday and some of the recent topics that have come up in debates with Bernie Sanders.

Maddow also asked about the violence at Trump rallies, and how Clinton feels about it.

“Count me among those who are truly distraught and even appalled by what I see going on, what I hear being said. You don’t make America great by dumping on everything that made America great like freedom of speech and assembly and the right of people to protest…Sometimes people have to be removed but it should be done in an appropriate manner. Other people in the audience should not be joining in. Mr. Trump should not be urging people on.

“This is deeply distressing, and I think as the campaign goes further, more and more Americans are going to be…really disturbed by the kind of campaign he’s running…When you run for President of the United States there is a certain level of behavior that is expected of you. You know, you can’t just be flailing around inside the White House saying whatever comes out of your mouth. Markets rise and fall. Conflicts can begin or get worse. So many things really do pay attention to what happens in the office of the presidency.”

Here’s how Donald Trump responded when asked about his rallies at last night’s GOP debate:

Trump pivoted the question into praise for the police:

“We have some protesters who are bad dudes, they have done bad things. They are swinging, they are really dangerous and they get in there and they start hitting people. And we had a couple big, strong, powerful guys doing damage to people, not only the loudness, the loudness I don’t mind. But doing serious damage. And if they’ve got to be taken out, to be honest, I mean, we have to run something. And it’s not me. It’s usually the municipal government, the police because I don’t have guards all over these stadiums. I mean, we fill up stadiums. It’s usually the police — and, by the way, speaking of the police, we should pay our respects to the police because they are taking tremendous abuse in this country and they do a phenomenal job….So we should pay — we should truly give our police. They’re incredible people, we should give them a great deal more respect than they receive.”

Returning to Maddow’s interview, Clinton says she feels good about Florida and is “working the state from top to bottom.”

As for her loss to Sanders in Michigan, she says, “I think there will be time to do a post-mortem on that…I think we may have fallen short in a couple areas…We didn’t do as well in turning out our vote in some key places.”

Maddow then went into discussion of trade and NAFTA in particular.

“I have said repeatedly that I would like to renegotiate it…I think you’ve got to take a broader perspective. Were some jobs lost? Yes. And was it painful… yes.”

She said she wishes Obama would do more:

“I wish the Obama administration right now would crack down on China’s dumping of steel into our market. You know, that should not be permitted. We have some tools that are available to this administration. I’d like to see them use it, and I’d like to send a very clear message to China: You may have your own economic problems, but don’t try to undermine and take away jobs in our steel industry any more than you already have.”

And distanced herself more from Obama on the TransPacific Partnership

“I think in some of these areas, like opposing [Obama] on TPP, I did hope that we would get an agreement I could support. It turned out I couldn’t. I am speaking out and I am urging the administration not to go forward with market economy [status for China] and to crack down on dumping of steel.”

Clinton also talked about putting an end to forced deportations, a point that came up in Wednesday night’s Democratic debate.

“Well the question was specifically about children but I would obviously like to go further. I don’t want to be breaking up families. I do think we have to focus on people who pose a threat to us. Not only violent criminals but terrorists who may be apt of some group planning something against us. Anybody who threatens our security should be deported no questions asked. But I don’t like the raids, I don’t like the roundups, I don’t like the level of deportation that we’ve been seeing in this administration. I want to move as quickly as I can toward comprehensive immigration reform with a path to citizenship.”