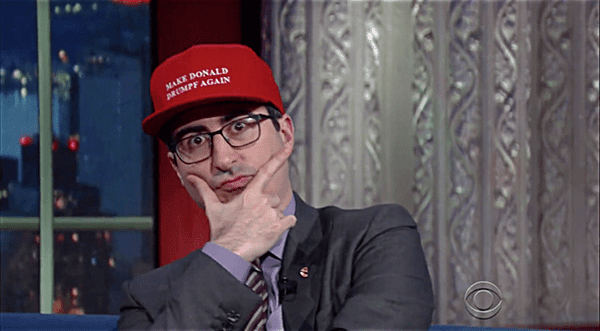 As we previously reported, John Oliver recently delivered a searing takedown of Donald Trump which he titled “Make Donald Drumpf Again.” Drumpf was reportedly Trump’s family name before it was anglicized. The purpose of Oliver’s trademarked Trump bonanza was to make Americans thinking of voting for Trump “look at him with fresh eyes.”

But as Oliver tells fellow Daily Show alum Stephen Colbert, he wasn’t always so focused on skewering the Donald. “I didn’t care, and I didn’t think I’d have to care,” Oliver said. “Well, no one thought they’d have to care,” Colbert added.

Oliver’s takedown of Trump was so popular that a hat his show produced, a one-off lark mocking Trump’s sadly iconic “Make America Great Again” slogan, became a phenomenal hit. Oliver sold 35,000 of the hats which read, “Make Donald Drumpf Again.” And much to HBO’s chagrin, they were sold at cost.

Oliver joked, “What’s funnier than not making any money on an unexpected inexplicable hit?”

One of the hat’s fans was Jay Z, who called HBO asking for a free cap. Oliver had a word of warning to HBO, however, before granting the artist the hat: “If he puts that on his head in public, you’re going to need more hats. And if his wife puts one on in public, we are no longer a TV show, we are a hat manufacturing company.”

Watch Oliver and Colbert talk about this year’s crazy election, below.

Previous Post: « 31 Years After Ryan White Controversy, Kokomo Adds LGBT Protections – VIDEO
Next Post: Samantha Bee Knows Why Hillary Made That Epic Gaffe on HIV/AIDS: ‘She Had a Stroke’ – WATCH »