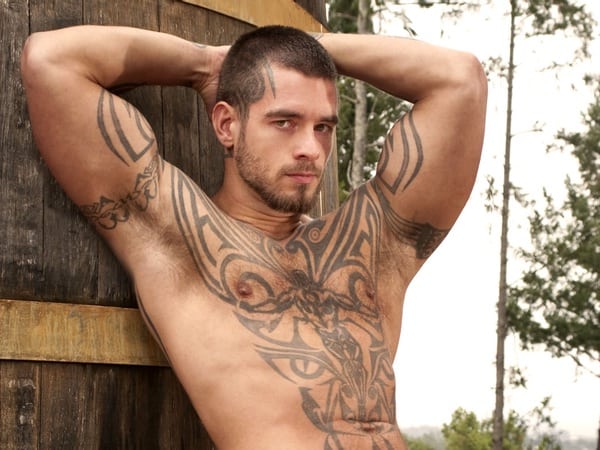 Logan McCree, the heavily-inked adult film actor who appeared in dozens of films from Raging Stallion and other studios, landing him Grabby and GayVN awards, has retired to become a firefighter in a small Scottish coastal town.

McCree, aka Philipp Tanzer, told the Scottish Sun that the entire town of Durness, Sutherland, where he works, knows about his past as does his firefighting squad and everybody’s totally cool with it.

Said Tanzer, who has background as a medic in the military:

“Everyone in Durness has heard about it. But I really try and help in the community as much as I can and people are very grateful. They needed fresh blood and I was willing to help. They asked me if I wanted to join and I said ‘Sure, why not?’ especially since I’m my own boss. They asked the area manager and he said, ‘Yes, it doesn’t have an impact on his job’”

The Sun also interviewed one of McCree’s fellow firefighters:

Tanzer says he’d like to settle down with a woman and start a family.

Previous Post: « Ohio Man Strangles Boyfriend to Death While on the Phone with 911: WATCH
Next Post: John Kasich Walks Back Remarks That He Would Consider Merrick Garland for SCOTUS – WATCH »