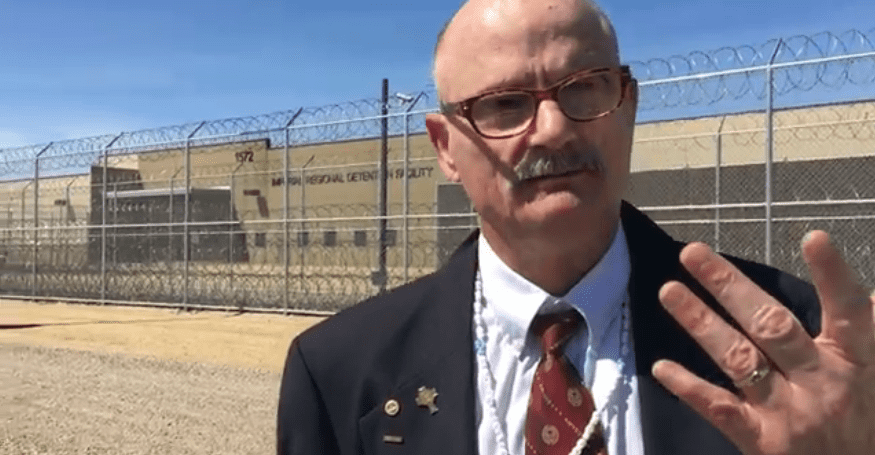 Tom Swann, 58, and Guillermo Hernandez, 21, tied the knot inside the Imperial Regional Detention Facility in Calexico, where Hernandez has been detained for the last two months awaiting a deportation hearing.

“This is the happiest day of my life,” Swann told The Desert Sun after the wedding.

The couple met in May 2015 and planned to marry on a golf course in Palm Springs on Valentine’s Day. However, they had to scrap those plans after Hernandez was arrested three days after their engagement in December.

Swann, a pioneering gay-rights activist, is legally blind and is HIV positive. Hernandez served as his caretaker while they were living together. According to his website, Swann has been a civil rights activist since the 1970s. In 1994, he won a lawsuit against the Navy over discrimination based on sexual orientation and HIV status. He also helped erect the nation’s first memorial for gay military veterans, near Palm Springs.

For the wedding, Swann purchased two wedding bands for $38 each on sale at Walmart. Hernandez, who wore his orange government-issued detention garb to the wedding, gave Swann a rosary that he spent two weeks making out of plastic he found inside the facility.

Hernandez’s parents brought him to the US when he was 7, but because he has three misdemeanor arrests, he isn’t eligible for President Barack Obama’s Deferred Action for Childhood Arrivals program.

Swann said he can’t afford to hire an immigration attorney. But he’s hoping their marriage will increase Hernandez’s chances of staying in the country. If not, he’ll consider selling his mobile home and moving to Mexico.

Watch an interview with Swann after the wedding below.

Previous Post: « Russell Tovey: ‘It Just Takes One’ Gay Footballer Brave Enough To Make a Difference – VIDEO
Next Post: Joy Behar on Caitlyn Jenner: ‘Transgenders for Cruz is Like Jews for Hitler’ – WATCH »