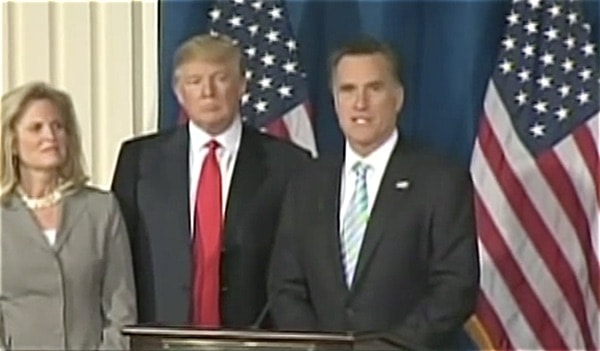 Mitt Romney is giving a speech today at the University of Utah in an attempt to persuade the Republican establishment to take down Donald Trump, a man whose endorsement he gladly accepted four years ago.

“Here’s what I know. Donald Trump is a phony, a fraud,” Romney said in his talk, set for delivery later Thursday. “His promises are as worthless as a degree from Trump University. He’s playing the American public for suckers: He gets a free ride to the White House and all we get is a lousy hat.

Romney adds, “His domestic policies would lead to recession. His foreign policies would make America and the world less safe. He has neither the temperament nor the judgement to be president. And his personal qualities would mean that America would cease to be a shining city on a hill,” referring to Ronald Reagan’s famous depiction of the U.S.

Romney added that “His promises are as worthless as a degree from Trump University.”

“Looks like two-time failed candidate Mitt Romney is going to be telling Republicans how to get elected. Not a good messenger!…Failed candidate Mitt Romney,who ran one of the worst races in presidential history,is working with the establishment to bury a big “R” win!…I have brought millions of people into the Republican Party, while the Dems are going down. Establishment wants to kill this movement!…I am the only one who can beat Hillary Clinton. I am not a Mitt Romney, who doesn’t know how to win. Hillary wants no part of “Trump”…Why did Mitt Romney BEG me for my endorsement four years ago?”

Trump also made a preemptive attack in a video on Facebook: