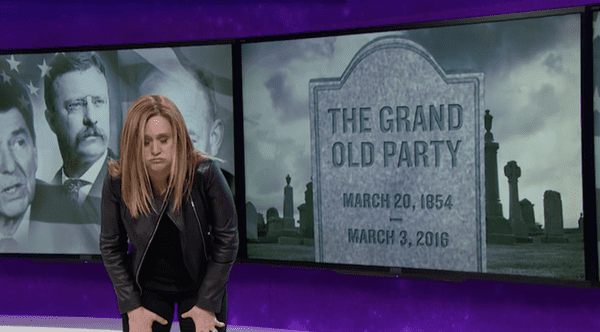 And the evidence of the passing is all around us.

For instance, take the hypocrisy of so-called establishment members of the GOP coming out only now to criticize Trump. Mitt Romney’s condescending rebuke of Trump has only galvanized his supporters, she argues. And as for John McCain calling Trump dangerous and unqualified, Bee found that pill a little hard to swallow.

Said Bee, “The guy who gave us Trump 1.0 [Sarah Palin] does not get to complain about the latest upgrade. If you didn’t think the arctic maenad who couldn’t name a magazine was dangerous and unqualified then you are never allowed to use those words because you don’t know what they mean.”

Then there’s Fox’s latest Republican debate in which Donald Trump decided to assure America that he has a big dick. Re-living that moment caused Bee to lose control of her bodily functions:

Watch as Bee declares the GOP DOA, below.